Deferment is not punishment, rather an opportunity to retain studentship – GIJ to students 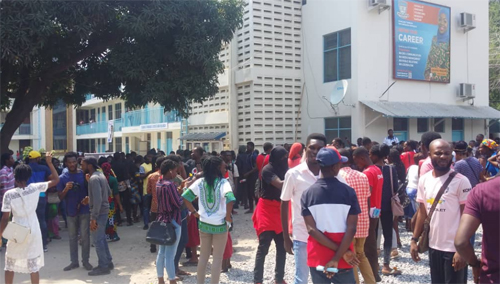 Management of the Ghana Institute of Journalism (GIJ) has justified its directive that asked students who were unable to meet registration deadline to defer their courses.

In a statement dated Wednesday, March 24, the management of the school indicated that the directive is in consonance with Section 9.3 of the Institute’s Undergraduate Academic Policies and Procedures which stipulates that “Students who fail to register (in person or by proxy) during the official registration period at the beginning of the semester forfeit their right to register for the semester or the entire Academic Year”.

According to GIJ, the decision taken by management should be seen as an “opportunity” and not “punishment”, as deferment of the course ensures that those affected retain their studentship.

“Management notification to students who fell foul of the above sections was to ensure that affected students do not lose their studentship. Deferment of programme should therefore not be seen as a punishment but as an opportunity to retain studentship

This statement justifying their position comes after some students of the institute took to the school’s premises to protest the directive.

Clad in black and red, the students accused the management of the Institute of being unfair, and asked for the directive to be revoked.

In an interview with JoyNews’ Manuel Koranteng, the agitated students insisted that management should have given them a fore notice regarding the consequences of late payment.

Reacting to that, the school’s management stated that prior to the reopening of school, it circulated the Academic Calendar which detailed registration timelines for students.

According to them, due to Covid-19 and its attendant effect on the economy, management decided to extend the initial deadline for registration from 26th December 2020 to 8th January 2021 after tertiary institutions received the green light from the presidency to re-open on January 9, 2021.

Again, in a quest to ensure that as many students as possible registered for the 2020/2021 Academic Year, “Management decided to, again, extend the deadline for registration to 3rd February, 2021.”

Even further, “As an act of magnanimity, Management upon expiration of the 3rd February deadline approved 25th February 2021 as the final deadline for the payment of the minimum 60% of fees and subsequent registration,” the statement added.

The several deadline extensions, according to the school’s authority, resulted in an unprecedented 24-week registration window without any penalty payment.

Nevertheless, the institute assured that payments made by students before deferment will be credited to the student’s account.

The management of the Institute further indicated that the directive came after a careful consideration to ensure that the academic processes required to keep the school running are upheld.