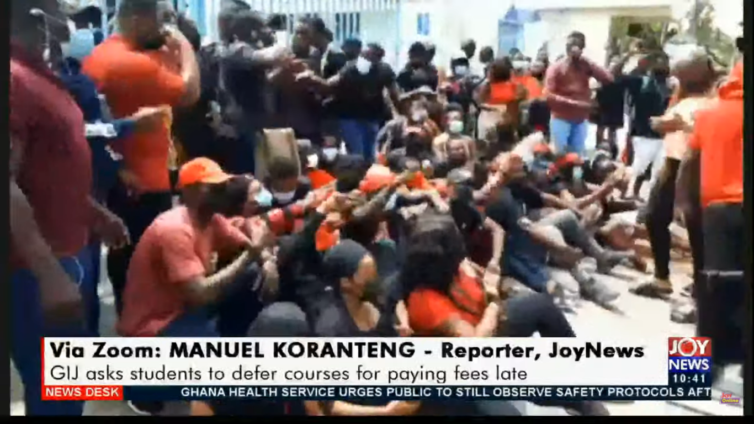 A member of the Concerned Tertiary Student has defended the ‘violent’ action some students of the Ghana Institute of Journalism (GIJ) portrayed during their protest against the new directive of management on Wednesday.

According to Smart Abbey, the representatives of the students when engaging with management of the school had their phones taken away from then, as such, they lost touch with the students.

He indicated that the lack of communication caused the students who were then protesting at on the Ridge campus anxious and uncomfortable.

“When we got to the North Dzorwulu campus, all of our phones were taken from us by the security detail that were present, therefore, we couldn’t communicate with our other students.

“We didn’t know why, but at the time, all we needed was the Rector’s attention and since we got it, we were fine but because the students were not hearing from us, they got a little jittery,” he said.

Scores of GIJ students throng the school premises on Wednesday to protest a directive from management asking those who paid their fees late to defer their courses for the year.

Clad in black and red, the students besieged the premises of the school chanting war songs to drum home their displeasure.

There was a near crash between the agitated students and the police after some of the students prevented vehicles from entering the edifice.

But speaking in an interview on Joy Prime’s Beyond the Headlines Thursday, Mr Abbey attributed the misdemeanor portrayed to lack of communication between the student body and its representatives.

According to him, a dialogue between management and the students is the aim to get the new directive revoked.

“We have told them that they should remain calm. Even though there were policemen who were frisking students but you don’t see us making noise about that because we don’t want it to look like it is a violent affair,” he insisted.

DISCLAIMER: The Views, Comments, Opinions, Contributions and Statements made by Readers and Contributors on this platform do not necessarily represent the views or policy of Multimedia Group Limited.
Tags:
Ghana Institute of Journalist (GIJ)
GIJ Protest
Smart Abbey