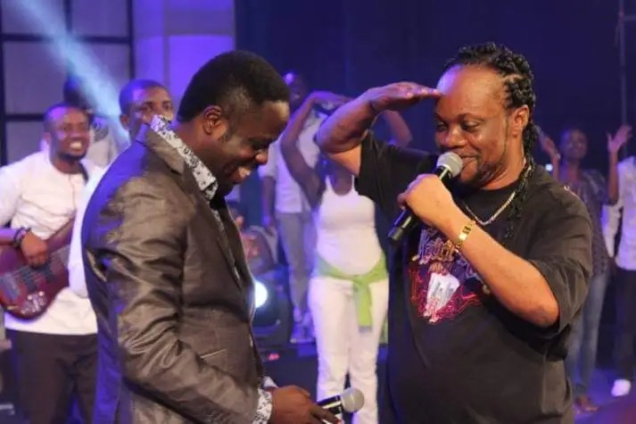 Days ago, there were reports that Ofori Amponsah was disappointed with Daddy Lumba because the latter had supposedly stolen songs the former had worked on.

The reports indicated that the singer had claimed that the 1999 album ‘Wo Ho Kyere’ was solely his work but was credited to Daddy Lumba.

However, speaking on Prime Morning on Joy Prime on Tuesday Ofori Amponsah stated that the reports are not entirely true noting that the album was a collaboration.

The album cover has both Daddy Lumba and Ofori Amponsah’s pictures on it.

He said he wrote the songs on the album, sang all of them while Daddy Lumba featured on about three songs and also served as the Executive Producer.

Narrating the story, Ofori Amponsah said that initially, he started working on the album Wo Ho Kyere with Daddy Lumba in 1992 after he heard his demo.

But after the duo parted ways for some years, Mr Amponsah shelved it to focus on the church.

However, after six years, Ofori Amponsah said got the opportunity to work in the studios of Despite. They worked together to complete the album.

“A day before I released the songs Daddy Lumba also came from Germany to the same studio. He passed by and my songs were being played and he was impressed. When I went back to the studio the next day, Daddy Lumba’s voice was on the music, that is what happened,” he said on Joy Prime.

The release of the album was then delayed and he, Ofori Amponsah, also travelled to Germany, the singer said.

But, on his return, Ofori Amponsah said he found out in the office of Despite that the album would be marketed as Daddy Lumba’s even though the latter was featured on about three songs.

He revealed that he initially cried because he felt the album he spent years working on had gone to someone else.

“I cried when I saw it (the cover) at Despite’s office. As a young man coming up, I felt I had recorded my first album and it was coming out. I suffered for six years but it’s released and another person’s name instead of mine is there. I was embittered but I had to let it go.”

Ofori Amponsah explained that the initial surprise, pain and other emotions he felt were what propelled him to do an even better job in the music industry.

He stated that had an extended discussion with both Despite and Daddy Lumba. Because the beloved singer also produced some of the songs it was safe to market it as a collaboration.

This discussion saw them agree to sign a contract where Daddy Lumba owned 70% of the work and 30% remains his, Ofori Amponsah explained.

However, following the album’s popularity, he revealed that Daddy Lumba wanted to reach another settlement where he gets to own 100%.

Ofori Amponsah said he learned to grow beyond it and pursue music as a full-time career. He explained that he had nothing but love for the legendary musician.

“I felt like if I wrote Anti Atta then I can do more. It was an opportunity for me. I had tried my best to get a producer, and so even if someone gives me just a piece of a song at that time, I will take it. So it’s all good,” he stated.

The singer believes that because he was not popular and that, having Daddy Lumba on the ‘Wo Ho Kyere’ project pushed him into the limelight.

This, he believes, gave him the needed attention for a subsequently successful career.

“I can’t forget what Daddy Lumba did for me, the words he spoke into my life,” he said.

DISCLAIMER: The Views, Comments, Opinions, Contributions and Statements made by Readers and Contributors on this platform do not necessarily represent the views or policy of Multimedia Group Limited.
Tags:
Daddy Lumba
Ofori Amponsah