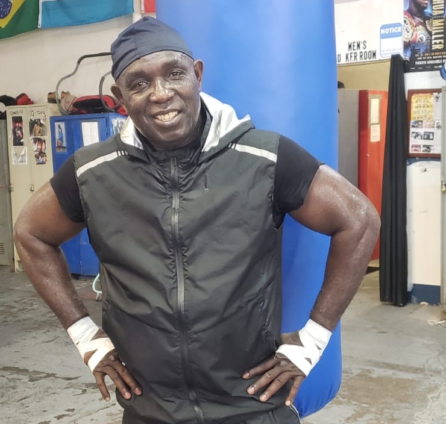 On two occasions he got it right in the corner guiding two of Ghana’s 10 world champions to win major titles and as Ghana suffers a drought to end 2021 he sees Isaac Dogboe and Richard Commey as the best bet to end it.

Coach Kwame Asante, the trainer and retired boxer based in New York in a recent conversation with Joy Sports, admitted that Dogboe and Commey are still top of the list of front runners to earn that glory.

Since Richard Commey lost his IBF lightweight title to Tefimo Lopez in December 2019, no other Ghanaian has managed to win a major world title.

“As of now the only boxers I can see winning world titles are Isaac Dogboe and Richard Commey,” he told Joy Sports.

Coach Asante further explained that the current rankings, ring activity and fight form of the two boxers put them ahead of their compatriots.

Interestingly former champions are in action between this month and next month in the US.

With his 30 wins in 33 bouts, Richard Commey is still working his way back to the top and has a major hurdle to surmount in former champion Vasily Lomachenko on December 11 at the Madison Square Garden in New York.

Both Lomachenko and Commey lost to Teofimo Lopez and would want to find their way back to fight him as he (Lopez) has now unified the division.

Commey won the IBF lightweight title against Isa Chaniev of Russia via a second round knockout and coincidentally lost the title the same way to Lopez.

Commey had a good warm up bout in February this year in Las Vegas after seeing off Jackson Marinez via a sixth round knockout. This win came after a 14-month lay-off. By that win he placed himself amongst the list of movers on the lightweight division including the champion Teofimo Lopez, Gervonta Davis, Ryan Garcia and Devin Haney.

Dogboe is also billed for a November 20 clash with Christopher Diaz, on the Terrence Crawford v Shawn Porter card. Dogboe who formerly held the WBO junior featherweight title won a majority decision in a 10 rounder against Adam Lopez in June this year.

This was after the latter had staged a last minute rally to push the scores even on the cards of Judge Dave Moretti 95-95. Judges Chis Migliore and Don Trella scored 97-93 and 96-94 respectively. Dogboe who has now written a record of 22 wins and two losses, has won two bouts since the back to back losses to Emmanuel Navarette. In July 2020 he stopped Chris Alvalos before following up with the Adam Lopez defeat.

Dogboe is currently ninth on the WBC’s rankings, 10th with the IBF and fourth on the WBO log. A win for him could easily guarantee another world title shot especially for the champions in the division who may require voluntary defences.

Ex-IBF bantamweight champion, Joseph Agbeko is the number two contender on the current WBO rankings. He could get a date against John Riel Casimero who successfully defended the title against another Ghanaian Duke Micah. The latter who has won 24 times in 25 bouts is currently out of the top 15 rankings of all the major sanctioning bodies. Ahead of that bout Micah had some personal challenges which affected his performance coupled with some managerial issues as well.

Former IBO lightweight champion, Emmanuel ‘Game Boy’ Tagoe is also one who could be knocking on the doors soon.  He is currently fourth on the WBO rankings behind a strong trio of Vasyl Lomachencko, George Kambasos Jnr and Denys Berynchik. He sits in 13th place on the IBF rankings and seventh on the WBC.

However he is yet to fight after the Majority Decision win recorded against Mason Menard in California in 2020. It was expected that he would fight before the end of the year but this doesn’t seem likely as he has no published fight for the November December calendar.

Also in 13 and 14th place respectively are Isaac Sackey and Wasiru Mohammed of Ghana who both had stints with the WBO Africa bantamweight title. Sackey (24-20-1, 19kos) bizarrely lost to a relatively inexperienced Yevgeny Pavlov (4-0) in Astana and this cost him an opportunity to win the WBA super bantamweight title. This loss will further complicate his journey to possible world title success.

Wasiru Mohammed who displayed so much talent as he enjoyed his status as WBO Africa champion is reported to have gone AWOL from his gym in Accra.