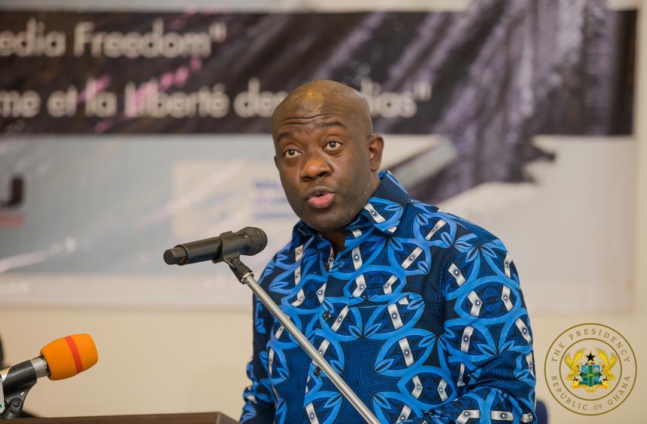 Information Minister, Kojo Oppong Nkrumah, is advising Ghanaians to be wary of misinformation and false accounts of events.

He gave this advice on the back of a video circulating on social media as well as mainstream media about ‘his’ description of how dirty politics is and why people should deal with politicians advisedly because politicians only seek their interests.

According to him, the video in the public domain is an edited version of a full video from the role he played in the launch of his former colleague in Parliament, Mr. Nenyi George Andah’s book, where he read portions of the book during the book review section of the program.

“Since yesterday, I have received several calls from people who chanced on an edited version of a video from the book launch of my friend Mr. George Andah titled ‘Determined to do more’. In the edited version of the video and the narrative spun on it by mischief makers, I am seen reading a text supposedly as lessons from politics,” he wrote in a statement sighted by JoyNews.

Mr. Oppong Nkrumah in a tweet explains that what he read was part of the pages that Mr. Andah had requested of him to read as part of the review, and not his own thought about politics, adding that people must understand the context of the video before commenting on it.

“For all who see or share that video please take a minute to ask what the context is. I was invited to review some pages in the new book. What you see me reading are paragraphs of the book and not a speech by me.

“The paragraphs contain a message someone sent to Mr. Andah when he announced he was going into politics. The sender suggested he shouldn’t enter politics because of those reasons contained in the message. Mr. Andah narrates the story and explains why he disagrees with the message. All of this is included in his book and in the paragraphs I read,” he wrote.

The Minister has therefore urged people to get the full video to help understand the context, and not fall for misinformation.

“I’d like to encourage you to watch the full video attached and or read the book for yourself and not fall prey to false narratives and misinformation online,” Mr Kojo Oppong Nkrumah stated.