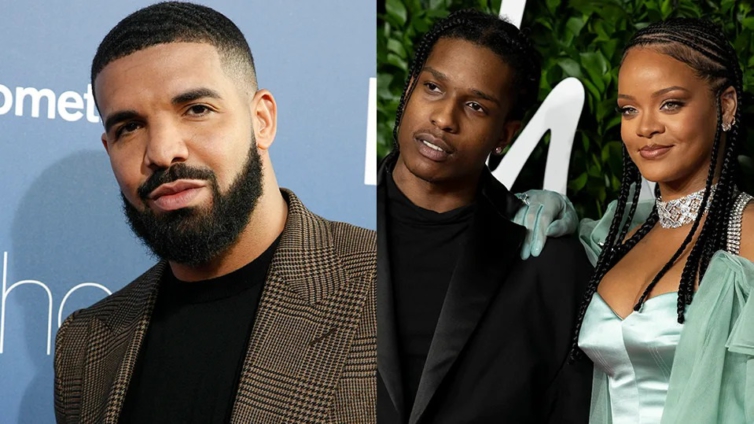 Done for good. Drake unfollowed Rihanna and ASAP Rocky a day after their pregnancy announcement.

Rihanna and Rocky, who started dating in 2020 after years as friends, confirmed they were expecting their first baby together on January 31, 2022, after the “Umbrella” singer was photographed in the Harlem neighborhood of New York City with a massive baby bump.

In the photos, Rihanna was seen in light-blue jeans and a long, pink puffer coat that was unbuttoned at the bottom, so she could show off her growing baby bump, which was covered in a gold cross and colorful jewels.

Rocky, for his part, wore a black beanie, a denim jacket and leather as he gave Rih a kiss on the forehead and held her hand.

A day after the announcement, however, Drake seemed to have unfollowed both Rihanna and Rocky, according to Twitter news account @PopTingzz.

A source told People on January 31 that Rihanna didn’t think she’d want to be a mother until her relationship with Rocky.

“Having a baby is something she was never focused on, but being with Rocky opened her up to the idea. She couldn’t be happier and is so excited to be a mom,” the insider said. “She’s loving all the changes to her body during pregnancy and has always celebrated pregnant women in her runway shows for Fenty.”

The insider continued, “Everything Rihanna does, she does it her own way on her own time table, and having a baby is no different. They’re just like any other pair of parents-to-be. Yes, they happen to be famous but they’re just the cutest, giddiest young couple that’s expecting kids.”

The source also reported that Rocky has “doted” on Rihanna from the “very beginning” of their friendship.”A lot of guys have tried to sweep her off her feet, but Rocky actually managed to do it,” the insider said. “He’s over-the-top romantic and sends her rooms full of flowers all the time. She’s never felt this way before and this relationship has changed her.” A second source also confirmed to People that Rihanna and Rocky “live together now and seem beyond happy” and that their “friends are excited too” about their baby on the way. “Everyone is happy it’s all working out. They will be great parents,” the insider said.

Another source also told People at the time that Rihanna and Rocky “each knew and respected the other through music, their collaboration and their other work” before their relationship. “It has grown from there. He admired her and was even awed by her,” the insider said. “He was eager to start a relationship and felt she was worth waiting for.” The source continued, “They always have fun together. They joke and act goofy. They enjoy life and like to travel. They love being together and are the loves of each other’s lives.”

News broke that Rihanna and Rocky were dating in November 2020, almost a year after her split from entrepreneur Hassan Jameel. The two met in 2012 after Rocky was featured on a remix of Rihanna’s single “Cockiness (Love It).”

Drake, for his part, first met Rihanna in 2005 when the Rih was filming the music video for her song “Pon De Replay” at a restaurant in Toronto, where Drake played music at.

In 2009, Page Six reported that Drake and Rihanna were seen kissing at a restaurant in New York City after her breakup with Chris Brown.

“She was drinking whiskey and apple juice and making out with him all night,” a source told the site at the time.

In an interview with Vanity Fair in 2015, Rihanna denied that she ever dated Drake and confirmed that her last “official” boyfriend at the time was Brown.

Rihanna also told Vogue in 2018 that she and Drake weren’t friends anymore. “We don’t have a friendship now, but we’re not enemies either. It is what it is,” she said.