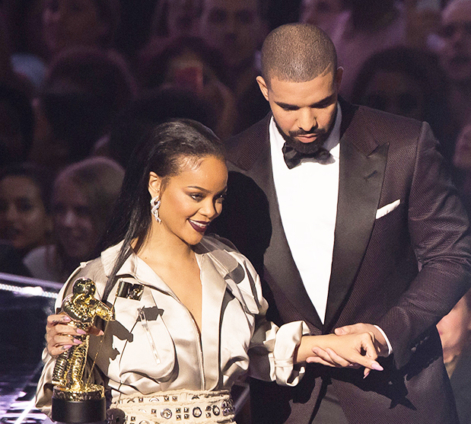 Twitter is having a field day with Drake memes following the A$AP Rocky and Rihanna pregnancy news.

On January 31, People revealed that Rihanna is pregnant with her and A$AP Rocky’s first child.

The news quickly skyrocketed to the top of Twitter’s worldwide trends, sparking countless memes along the way. A particularly popular angle of the jokes has been Drake.

Drake and Rihanna have an interesting history together that dates back all the way to 2005, when they had their first encounter on the set of Rih Rih’s “Pon De Replay” music video. They sparked dating rumours in 2009, but by June of 2010, Drake was quoted by The New York Times saying he felt like Rihanna had used him.

However, years of back-and-forth between the two followed, which ultimately culminated in 2016 with their collab “Work” and Drizzy’s infamous MTV Video Vanguard Award speech where he professed his love for Rihanna.

They even got matching shark tattoos, which Rihanna covered up last year once she started dating Rocky.

“She’s someone I’ve been in love with since I was 22 years old,” he said during the ceremony. “She’s one of my best friends in the world.”

During an interview with Vogue in 2018, Rihanna revealed that she and Drake were no longer friends. “We don’t have a friendship now, but we’re not enemies either,” she explained. “It is what it is.” Drake’s response to this appeared to be that he unfollowed her on Instagram.

The two superstar’s paths haven’t crossed much at all in the years since 2018, but every time Rihanna’s dating life comes to the surface on social media, the Drake memes inevitably follow.

Head below to see what Twitter came up with now that A$AP Rocky and Rihanna are going to be parents.

“I knew our relationship was ROCKY, but I never thought you’d move on ASAP” pic.twitter.com/I7s1s8d5Xd

Everyone: Rihanna is pregnant!!
Drake on the phone with Riri:“ I know our relationship was Rocky but you moved on ASAP”😩😢 pic.twitter.com/koc9L6p7sF

drake after waking up and seeing why rihanna is trending pic.twitter.com/AScU0c2Bae

Drake watching Nicki and Rihanna fall pregnant by other men:

Drake rn crying and playing Marvin’s Room the whole day after finding out that A$AP Rocky and Rihanna are having a baby pic.twitter.com/Vvmp3B2blV

Drake seeing Rihanna Pregnant news all over the internet pic.twitter.com/NojjGDYt0W

Drake after finding out Rihanna is pregnant 😂😂💔 pic.twitter.com/gFWPYu6ILL

Drake after hearing A$AP Rocky and Rihanna are having a baby … pic.twitter.com/l0OCoIWNcb

Drake this morning when he seen why Rihanna is trending pic.twitter.com/o6Ip1q0spL

Drake is somewhere in the studio recording “Yeeaaahh She was the love of my life, thought she’d be my wife….. my love is stagnant even tho she’s pregnant