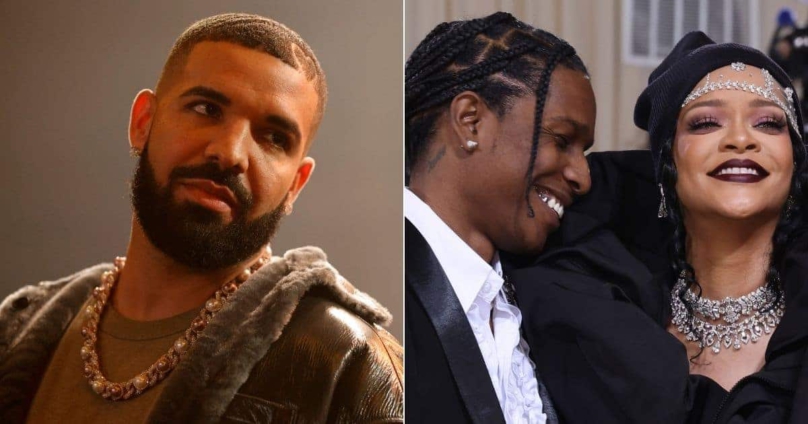 The Canadian-born rap once called Rihanna his “ultimate fantasy.”

Rihanna’s pregnancy has fans speculating over how Drake is reacting to the singer’s ‘announcement’ that she’s expecting her first child with boyfriend A$AP Rocky.

Rihanna and Drake reportedly once dated, and Monday’s news that she and Rocky are expecting their first child has prompted fans to make memes about Drake, and RiRi’s ex-boyfriend Chris Brown.

Rihanna and Drake reportedly first met back in 2005 on the set of her “Pon De Replay” music video. They would go on to collaborate on her hit singles “What’s My Name,” “Work,” and on the track “Too Good,” which appeared on Drake’s album Views.

“She’s someone I’ve been in love with since I was 22 years old. She’s one of my best friends in the world. She’s a living, breathing legend in our industry,” said Drake about Rihanna at the VMA’s in 2016. Two years later, the thrill was gone as Rihanna revealed to Vogue that she and Drake no longer “have a friendship,” but noted that they’re not “enemies either.”

Following the release of Rihanna’s pregnancy pictures on Monday, several celebs took to social media to congratulate her with Nicki Minaj writing on Instagram, “So happy for you mama. Conquered the world already. Given so much. Nothing left to prove. You deserve your own little gift now. Different level of joy that money can’t buy.”

Paris Hilton posted: “Congratulations Queen! So exciting! So happy for you @Rihanna! You look so beautiful and are going to be an amazing mother. 🥰”.”

Meanwhile, Rihanna fans are roasting Drake amid news her big news. Check out some of the reactions below.