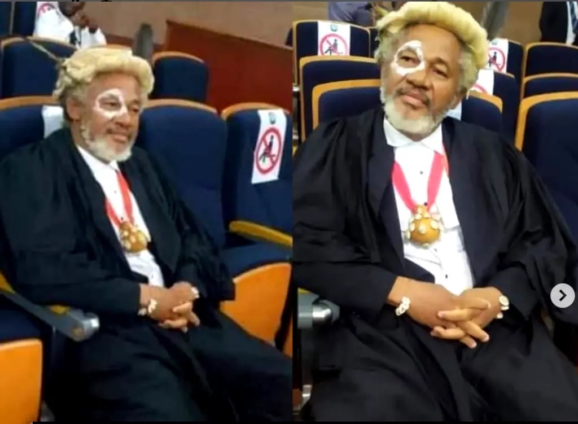 A barrister turned heads at Nigeria’s highest court on Thursday when he appeared in the attire of his traditional religion.

Malcolm Omoirhobo’s mixture of a wig, robe, a white patch around his right eye, a gourd around his neck, a feather and a red cloth around his waist was not the usual court-day appearance.

With a hint of sarcasm, he remarked that he wore the attire to show “gratitude” to the Supreme Court which last Friday, ruled in favour of female Muslim students using hijab in government-owned schools in Lagos.

BREAKING: Drama at Supreme Court Abuja as lawyer attends proceedings in traditional worshipper’s regalia following judgement of the Supreme Court that allows all Nigerians to express their way of worship and use of hijab in schools and public places delivered on the 17/6/2022. pic.twitter.com/efW6Pr6YqD

The court had ruled that the ban on the use of hijab in public schools in the state was discriminatory against Muslim pupils.

Mr Omoirhobo said with the ruling, the Supreme Court had reaffirmed the “freedom of thought, conscience, and religion.

“I am a traditionalist and this is the way I worship. Based on the decision of the Supreme Court, this is how I will be dressing henceforth in court because I am a strong adherent to ‘Olokun’, the god of rivers,” he said.