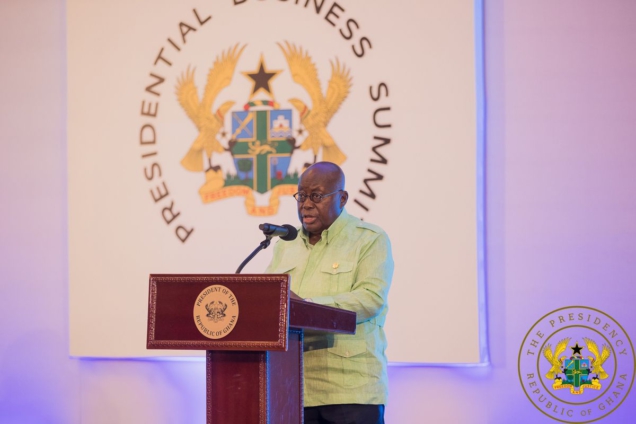 President Nana Akufo-Addo says Ghana’s economy is rebounding faster from the ravages of Covid-19 than envisioned, following a slow rate of growth in 2020.

Speaking at the maiden edition of the Presidential Business Support, on Tuesday, at the Kempinski Hotel, President Akufo-Addo noted that the support offered by the private sector, coupled with effective management of the Covid-19 crisis by government, have enabled the Ghanaian economy outperform that of her peers and is rebounding faster than envisioned.

The President continued, “The strong rebound in growth, low inflation rates, the stable currency, the strong reserve position, and FDI flows, are clear indicators of our collective desire to restore the Ghanaian economy onto a path of sustained stability and growth. We will continue to strengthen and deepen our engagement with the private sector towards realizing this goal.”

President Akufo-Addo also told the gathering that, since 2017, government has implemented policies and programmes that led to consistent economic growth averaging 7%, making Ghana one of the world’s fastest-growing economies.

Ghana, he stressed, has become the leading recipient of Foreign Direct Investments (FDI) in West Africa, and one of the most attractive investment destinations on the continent of Africa.

The President stated however, that following the onset of Covid-19, which disrupted the global economic order, the pandemic eroded the significant gains made by the Government in the management of the economy.

“That notwithstanding, we were one of the few economies in the world to have recorded positive growth, as the global economy went into recession. We have taken bold measures necessary to stem the risk of a recession, mitigate the negative economic impact of the pandemic, and significantly reduce its burden on our population,” he said.

Explaining the rationale for the holding of the Summit, President Akufo-Addo indicated that these consultative engagements with the private sector have been convened as part of the government’s Public Private Dialogue (PPD) framework, to help improve the business environment in the country.

Government, he explained, fully recognizes that it is the resilience and ingenuity of the private sector that can guarantee economic growth, create substantial job opportunities for Ghanaian youth, and strengthen the country’s position as an economic powerhouse in West Africa.

“Consequently, I have directed Ministers and relevant heads of state institutions, to participate actively and fully in this important Summit, and ensure that there is a constructive dialogue between Government and the private sector towards realising our vision of a Ghana Beyond Aid,” the President said.

Re-echoing government’s commitment to the structural transformation of the Ghanaian economy, he indicated that, since 2017, government has launched a comprehensive and ambitious programme for industrialization, based on the Ten Point Industrial Transformation Plan, the implementation of which is being coordinated by the Ministry of Trade and Industry.

“This Plan, amongst others, includes the One District One Factory (1D1F) initiative, the new Strategic Anchor Industries programme, designed to diversify our economy beyond cocoa and gold, the development of industrial parks and special economic zones, the development of small and medium-scale enterprises (SMEs), and the establishment of Business Resource Centres (BRCs) and Technology Solution Centres (TSCs) in various parts of the country,” he said.

DISCLAIMER: The Views, Comments, Opinions, Contributions and Statements made by Readers and Contributors on this platform do not necessarily represent the views or policy of Multimedia Group Limited.
Tags:
Akufo-Addo on Covid-19
Covid-19 in Ghana
economy of Ghana