Ejura murder: Who killed Kaaka Macho and for what? 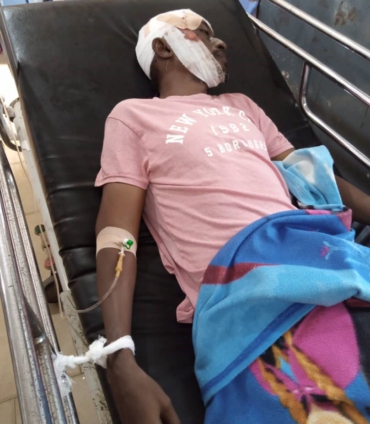 The murder of Ibrahim Mohammed, also known as Kaaka Macho sparked chaos in Ejura, leading to the death of two others and four more sustaining gunshot wounds.

There are questions over why the social activist, who spent time reporting the ills in his society and sought a change on social media platforms, especially Facebook, could become a target for murder in cold blood.

New media watchers wonder how the man whose activism receives little or no attention with limited reach on social media could become a target for making the ruling government unpopular.

It must be on record that the late Ibrahim Mohammed’s advocacy on social media received more attention after his death than the work he did whilst he was alive.

Several visits to his Facebook wall before his demise indicated his social activism series dubbed “What’s going on in Ejura” attracted a maximum of two visitors or one in most cases during Facebook Live events.

What will his killers gain if he was murdered for his social activism?

Another school of thought is that the late Ibrahim Mohammed, a known NPP supporter who until his death had a preferred candidate for the Municipal Chief Executive position, may have been killed over his choice candidate for the MCE position.

Though police investigations are ongoing, JoyNews has been piecing together snippets of information gathered, following developments after the attack on the late Kaaka.

Rumours were rife in Ejura that the two men, known bodyguards of the MCE for the area, Salisu Mohammed Bamba, plotted the attack on the deceased.

Salisu Bamba has since denied the claim that the two are his bodyguards.

Ibrahim Issaka, also known as Anyaas was chased by some angry youth who wanted to lynch him because they suspected his involvement in the murder of Kaaka Macho.

It took swift police intervention to save him from the angry youth who ransacked the Assembly’s Revenue Collection Check Point.

Fuseini was also arrested at the same spot as Issaka. Unconfirmed reports say the two once had a fracas with the late Kaaka, a development that sparked speculations.

But how connected is Kaaka’s brother, Iddi Mohammed, who was arrested on June 30, 2021?

A woman (name withheld), described by police as a tenant, appeared to have given a clue as to who killed Kaaka as she gave vital information to police investigators on how the deceased’s elder brother could be connected.

According to the woman who has since granted some media interviews, she was attracted to the scene by an unusual noise in the house only to see the suspect drag his brother unconscious towards the bathroom entrance.

She left to knock at the door of the wife of the late Kaaka only to see the suspect flee the scene. Another tenant who corroborated the story is said to have seen Iddi, also known as Baba Iddi, walk out of the house a few minutes after the incident, which police say occurred at 01:30 a.m.

She has since in the company of her husband, also given a statement to the police.

JoyNews sources say Iddi, who returned from Nigeria after over 18-years of stay, has had issues with the deceased, his wife and mother over family inheritance.

Could this serve as fuel for the attack on his blood brother?

Perhaps subjecting a blood-stained club believed to have been used to murder the social activist into the forensic analysis will make light investigations for the police.

All three suspects are expected to reappear in court on July 22, 2021.