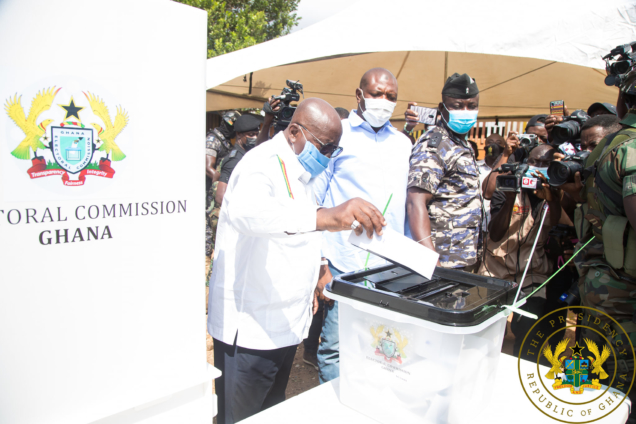 President Nana Akuffo-Addo has cast his vote in his hometown of Kyebi at the Rock of Ages polling centre in the Abuakwa South Constituency in the Eastern Region.

He was accompanied by his wife, the First Lady, Rebecca Akuffo-Addo.

President Akuffo-Addo who wearing his face mask in observance of the Covid-19 protocols was led to wash his hand and apply hand sanitiser before he was taken through the process to cast his ballot.

The President is contesting in the elections for a second term.

Speaking to the press, he lauded the EC for the voting process in place and spoke about his optimism to win.

Meanwhile, the Vice President, Dr Mahamudu Bawumia has also voted in the Walewale constituency in the North East Region.

After casting his vote, he called for a peaceful electoral process.

Dr. Bawumia urged Ghanaian citizens to exercise their rights to vote in the 2020 Elections.

“We want to wish the Electoral Commission well. We want to wish all Ghanaians well. And we should make our nation proud by ensuring a peaceful process,” he said.

Nana Akuffo-Addo began his race to presidency in 2008 but lost the polls after the elections went into a run-off.

He consequently contested again in 2012 and lost. He challenged the results at the Supreme Court but lost as the court ruled against him. The case has now been dubbed in history as the Election Petition.

The President again contested in 2016, where he won this time round. As president, Akuffo-Addo has implemented policies such as the Free SHS programme, One District; One Factory among others.