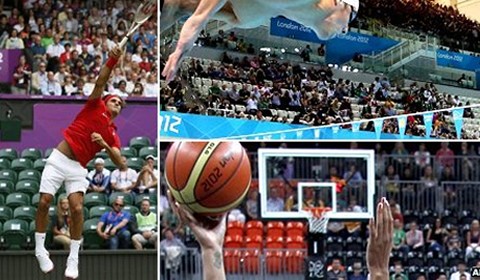 The London Olympics organisers investigate why some venues have had empty seats, as the sports focus turns to swimming, tennis and volleyball.

Games chief Jacques Rogge says bosses are “getting to grips” with the issue.

Empty seats were also seen at Wimbledon, the Basketball Arena, the volleyball at Earl’s Court and the gymnastics at the O2.

While areas of seating where tickets have been sold to the public appear to be packed, at some venues “Olympic family” areas – often with the best views – have been emptier.

“The sport needs some tickets – the federation needs those for their officials to be in there. We give tickets to the athletes and their families, and journalists, as well, need some tickets.”

“They need some flexibility and, unfortunately, that leads, sometimes, to those areas and those seats being empty but we are really getting to grips with this.”

Tickets are also given to sponsors, including Visa which, on Sunday, said it had made “great efforts” to use its full ticket allocation, the majority of which, it said, had been given to competition winners.

And British Airways said most of its tickets were given away “many months ago” to members of the public or members of staff.

American Paul Fondie, who now lives in Kew, Richmond, said he was frustrated by the number of empty seats at the men’s gymnastics at the O2 on Saturday.

He said he and his wife had not been able to take their six-year-old son because they could not get an extra ticket.

“It tainted my experience of the Olympics – it was our moment to come under the microscope and show that London can do it well.”

Culture Secretary Jeremy Hunt told BBC News that organisers were looking “very urgently” at the problem and that, if those groups were “not going to turn up, we want those tickets to be available for members of the public because that creates the best atmosphere”.

He said a Wimbledon-style system – where people leaving the stadium handed tickets back so their seats could be reused – had been introduced for the Games.

BBC correspondent Andy Swiss says ticketing is a sensitive issue after many fans missed out and the empty seats are a problem Locog will be anxious to solve.

Meanwhile, Mansfield-born Adlington begins her defence of the two gold medals she won in Beijing four years ago with heats for the 400m freestyle on Sunday morning – starting at 11:23 BST – ahead of the final in the evening.

Her battle to hold on to her 800m freestyle title will begin with heats on Thursday morning before Friday night’s final.

Cyclist Cooke, meanwhile, won the first of GB’s gold medals at Beijing but she could be forced to sacrifice her own gold medal hopes this time to be a support rider for teammate Lizzie Armitstead.

It has yet to be decided who starts the race as leader and the designated leader could change depending on how the race develops.

Andy Murray – who was defeated with his brother Jamie in the tennis doubles on Saturday – will play Stanislas Wawrinka in the singles at Wimbledon.

And Briton Ben Ainslie will begin his quest for a fourth Olympic gold medal as the first day of Olympic sailing begins at Weymouth Bay.

As well as the individual events, British teams will also compete in basketball, handball, hockey, volleyball, water polo and the football on Sunday.

Meanwhile, the US basketball team – the most decorated in Olympic basketball – will begin their title defence against France later.

Elsewhere in other Olympic developments: