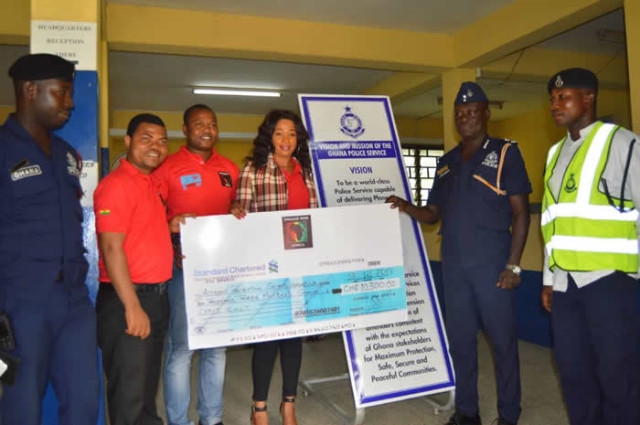 Police in the Eastern Region have stepped up a campaign to reduce fatalities resulting from road accidents in the country especially during the Christmas yuletide and beyond.

The move comes on the heels of worrying trends of road accidents recorded in the region in recent times.

Their resolve has received a boost from Engage Now Africa (ENA) cash cheque donation to help the police repair broken down vehicles and facilitate patrols.

Ghana has been grappling with issues of motor crashes as a result of gross disregard for traffic laws on our roads.

This has resulted in dozens of people losing their lives every year.

Statistics from the Ghana police service and the national road safety commission show the country has recorded over 2,000 road accidents since the beginning of this year.

Most of these accidents occurred during Christmas and other festive occasions because of the desire of some drivers and vehicle owners to maximise profits by over speeding.

The fight against irresponsible motorists has not been completely achieved.

This is due to logistical constraints and the lack of resources to commit to maintaining police patrol vehicle.

Eastern Region MTTD Police Commander, ACP Cephas Coffie, says though the police are poised to reduce carnage during this festive occasion, they lack the resources to undertake effective road monitory.

The commander said this when ENA, an NGO presented cash cheque of GHÈ»10, 000 to assist the MTTD repair broken down patrol vehicles.

Country Director of ENA, Cecilia Amakwah, who presented the cash donation, explained the gesture is geared towards motivating the police in their line of duty.

‘’As an organization we help people out of poverty, to help them gain knowledge and also to strengthen people economically. We thought it wise that if you have the police on the ground protecting us then we will be doing what we are supposed to do by being effective and go out there to help our African brothers to nip them out of poverty. Our gesture is to assist the police on the road to protect us from crimes and accidents,” she stated.

ENA has also presented 300 bags of cement to support the construction of the offices of the Kwahu West Municipal Health Directorate in Nkawkaw.

Municipal health director, Celestina Asante, tells Joy News the office when completed will halt the practice where staffs compete for space in what is supposed to be a storage facility for vaccines and other medication.

Municipal Chief Executive, Yaw Owusu Addo, thanked the team for the gesture and promised to use the donation judiciously.