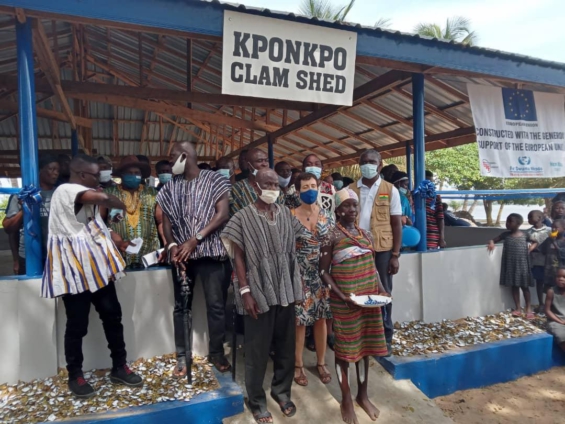 The production of clam in Ghana, locally known as “adode,” yielding an annual income of $4 million for the harvesters and processors, has been given a boost through a project for community empowerment and sustainable practices, sponsored by the European Union (EU).

They have also been trained on how to document the traditional management arrangement that regulates the activity and ensure these rights are secured in the context of increasing competition from other users of the estuary.

A study conducted by the Kwame Nkrumah University of Science and Technology (KNUST) indicates that about 251 canoes and 503 fishers were engaged in Ghana’s clam sector while the average daily catch per canoe is 130 kilogrammes, with an annual harvest of 7,700 tonnes worth GHC4,620,408.

Clam production is said to economically support a large riparian population by providing rural jobs for 700 men and women and indirectly over 3000 dependents.

It also has great potential to transform livelihoods, generate incomes and reduce poverty around the Volta estuary.

Mr Kofi Agbogah, the Director of Hen Mpoano, said clams were important sources of dietary protein, while their shell had high calcium content with a potential for micro nutrition for children, pregnant and lactating mothers.

The shell is a source of raw materials for the production of paint, gypsum, poultry feed and milk.

He, however, said the economic importance of the clam shell for industrial use was currently underserved as much attention had not be paid to it by the state.

Mr Agbogah was speaking at the handing over of clam processing sheds to operators at Ada, which also coincided with the inauguration of Co-management Unit for Clam Fishery on the Volta Estuary at Kponkpo, near Ada Foah in the Greater Accra Region.

He said generally, lagoon and estuary fishery under which clamming fell, had not been given much attention by the Fisheries Commission.

He said with the new Co-management Policy, which “tries to look at getting communities to manage fisheries with the Government, a little more attention will be paid to the estuaries.”

Mr Agbogah said some work had already been done in the Ankora, Densu and Pra estuaries and now being done in the Volta estuaries.

He said the partners had been working closely with the Fisheries Commission and the Government to draw attention to the fact that those areas also provided very useful resources for communities, adding; “They are just too important to be ignored”.

However, other estuaries like the Keta Lagoon, Bosomtwi, and the Princess Town provided great resources the country needed to focus a little more on to improve the lives of community members.

Madam Diana Acconcia, the Ambassador of the EU Delegation in Ghana, said clam harvesting had been known to be an important livelihood for many people in the project communities, hence the EU’s decision to support in sustaining and prospering the sector.

She said information available indicates that the grounds for clam production had dwindled from 100 kilometres from the pre-dam era to a narrow stretch of 10 kilometres due to the development of sand bars at the estuary.

“We are very worried for the sustainability of Ghana’s fisheries, that catches are going down and down in the later years and that needs to be addressed by all stakeholders,” she said.

She said by having a Co-management Unit, the clam industry could work to resolve conflicts and ensure its sustainability for income generation.

She expressed the hope that the operators would be assisted to add value to the product and be able to sell their clams at supermarkets in the country.

Mr Peter Kuusaana Canicius, Programme Officer, EJF, commended the operators for their cooperation in ensuring the successful implementation of the project that spanned 2016 to 2020.