Euros on MGL: Impressive Italy breeze past Turkey in opener

Euro 2020 opened in spectacular fashion as Italy got their campaign off to an impressive start in front of their own fans with a comfortable victory against Turkey.

There were shades of Italia 90 before kick-off when Italian opera tenor Andrea Bocelli, against backdrop of a breathtaking firework display, graced the opening ceremony with a moving performance of Nessun Dorma.

And when the rescheduled tournament finally began in earnest, an own goal by Merih Demiral and strikes by Ciro Immobile and Lorenzo Insigne settled the one-sided Group A match – the first of 51 fixtures to be played in 11 European cities over the next month.

The Azzurri dominated the first half but could not find the net, Giorgio Chiellini going closest with a header from a corner which brought a fine save from Ugurcan Cakir.

They broke the deadlock when Demiral turned the ball past his own keeper trying to cut out Domenico Berardi’s second-half cross before Lazio’s Immobile, playing on his home ground, pounced after Leonardo Spinazzola’s shot was blocked by the keeper.

Italy wrapped up a satisfying win though Insigne’s powerful finish, after he was teed up by the impressive Immobile.

A sense of celebration

On a warm night in Italy’s capital city, the national stadium was only a quarter full but the fans present added to a sense of celebration at the start of Europe’s biggest football carnival delayed 12 months by the coronavirus pandemic.

The 16,000 inside the ground represented the biggest crowd in Italy for a year and a half, while those unable to get a ticket watched the action unfold on big screens set up across Rome.

With the city hosting a further three three matches during the tournament, authorities in the city have laid on a programme of events, including shows tracing the history of Italy in the Euros.

The opening ceremony also featured Italy World Cup winners Francesco Totti and Alessandro Nesta kicking footballs into the stands, not to mention trapeze artists performing high above the pitch – but eventually the pre-match spectacle ended the and the football finally began, although not before the match ball was brought on to the pitch by a remote controlled car. 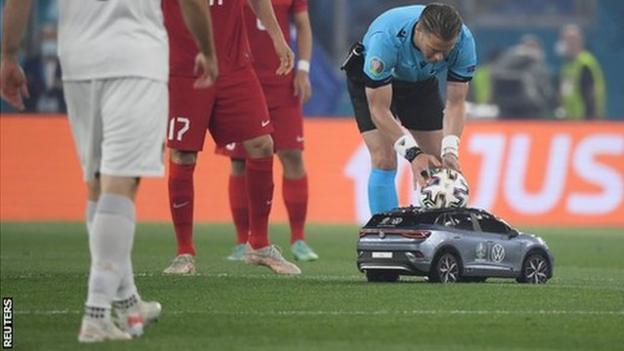 Italy’s coach Roberto Mancini had talked about “an extra level of pressure” on his team for being involved in the opening match.

Portugal in 2004, Switzerland in 2008 and Poland in 2012 are all examples of host, or co-host, nations coming unstuck on the opening night of the European Championship.

The pressure on the Azzurri was not helped by their failure to qualify for the 2018 World Cup but this was an impressive start from one of the fancied teams.

For the first time in a single game at the European Championship, the Azzurri scored three times, Mancini’s side registering 24 attempts as they turned on the style.

Turkey had beaten world champions France in qualifying but they lacked a real threat without Cenk Tosun, their top scorer in qualifying, who is out of the tournament with a knee injury.

Both teams are back in Group A action on Wednesday, with Wales providing the opposition for Turkey in Baku (17:00 BST) while Italy take on Switzerland in Rome (20:00).

Financial sector clean up: 84% of depositors ...