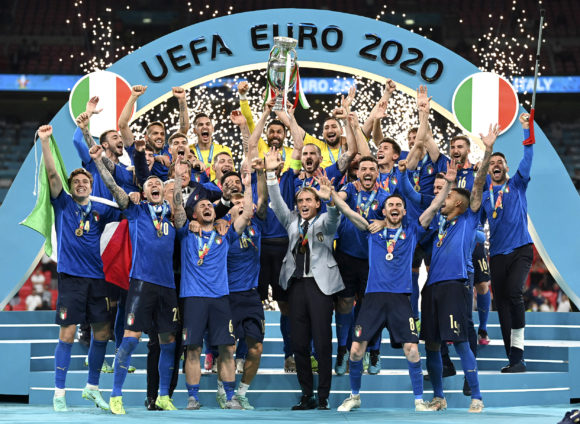 Champions Italy have five players in the team of the tournament

It started in Rome on June 11, returned to Rome on July 11, it never came home.

60,000 fans in the stands, millions watched on screen as Italy lifted the Euro 2020 trophy in Wembley. It was a sight to behold from an Italian perspective. Ecstasy unconfined for the 2006 World Cup champions aficionados, heartwrenching moments for others. When parties in Rome and other parts of the world began, there were tears in London and other parts of the world, too, for the English community.

Those who sang “it’s coming home” went home dejected on a night Italians can finally say there saw light at the end of the tunnel.

History was on the side of the Azzuris. The 11 men chosen by Mancini stepped on the Wembley turf as the men who failed to qualify for the last edition of the FIFA World Cup. For England, they were semi-finalists in same competition Italy missed out.

Countries that failed to qualify in a preceding World Cup before Euros often end up victorious. For those who believe in history and the role it plays, only three teams have ever won the UEFA European Championship on home soil: Spain (1964), Italy (1968), and France (1984).  This was history repeating itself before the very eyes of Prince William, David Beckham, and the thousand others at Wembley. They probably knew this, but as it happened, 55 years history was broken and a new one was set just a couple of days ago as the Three Lions reached the final; their first final since 1966. Their first final in the history of the Euros. Winning was possible.

But, it was never to be as the Azzuris, who left many hearts broken in 2018  for missing out on the Mundial, got same people partying all night long, drinking up the music and wine.

Giorgio Chiellini will have 11th July 2021, encrypted his memory. He will look back at this day, turn right to his sofa, look his wife in the eyes seated far-right and say, ‘rescinding my decision to retire from the national team was one of the best decisions I ever made in my career.’

Holding that trophy high in the sky, he led a team and ended 53 years drought of never winning the Euros. He, alongside Andrea Barzagli, Daniele De Rossi, and captain Gianluigi Buffon who were influential figures in the dressing room declared their retirement from the national team after losing 1-0 to Sweden in their final 2018 World Cup qualifying game.

It was a phase where all the belief that the last chance for their golden generation to win another major tournament just as they did in 2006 was gone. This was never the goodbye envisaged, but they sure had to bow out. Then head coach Gian Piero Ventura, would later lose his job on November 20th, 2017. It was a tough period for Italian football, it was a patch where a need arose for the country to transition from the old guard to a new one.

During this period, the players and management were censured for letting a nation down, and out of the World’s most revered festival. It felt as though that was the end. Then came Roberto Mancini in May the following year.

It was a period the love of the fans was almost gone. Mancini saw how inexperienced the youth were in the national team and decided to convince a few veterans to rescind their retirement from international football and play major roles in his rebuild. Chiellini, newly crowned champion of Europe was one of the influential figures brought back. Under the reign of the ex-Manchester City boss, Italy has gone on a 34-game unbeaten streak, that is they have not lost a game in three years, including the success at last night.

What makes this trophy even more special is how it has reunited the country, brought back the love of its citizens and supporters globally, as well as giving them a positive memory to hold for generations.

Since the outbreak of COVID-19, Italy has been one of the worst-hit countries, recording over four million cases and over 128,000 deaths as of July 11.

There were COVID-19 deaths in Italy than the whole of China since its emergence. Medical teams were sent from around the world to provide Italy with some form of aid and assistance. It is a testimony of how severely hit they were.  It felt like the country had come to a standstill, with every corner mourning the loss of a relative, friend, or co-worker.

To overcome this period and step before the stage and exited as heroes is unquantifiable. Skipper, Chiellini could not hide his affection for all those who stood by the country and chose the best moment to appreciate their service via his social media account on Instagram, saying, “In our hearts. The pain of those who have suffered, the struggles of so many brought to their knees by the pandemic, the desire to live again. The faces of women, men, old, young, children, and those who saved our lives: doctors, you pushed us. You helped us and You sang with us. The result is only part of the game but this result, this victory, these tears of joy are dedicated to you. We made history!”

If anyone who was a part of this crop of players never understood how a nation was wrecked by a pandemic and needed to be brought together, Roberto Mancini and his staff did.

There was only one way of letting people erase the memories of losing their loved ones temporarily, and the technical team understood the task at hand.

They began instilling a winning mentality into the side from their first game and gradually built their spirits up game by game. A “never give up” spirit is exactly what they displayed in the final after going a goal down in less than two minutes. The equalizer came in the second half, but they never stopped mounting pressure on the English. The game eventually entered extra time and Italy won 3-2 on penalties. What a tournament it has been. The tears of joy, the shouts of the trophy coming to Rome. It will forever remain embedded in the hearts of the Azzuris and their followers.