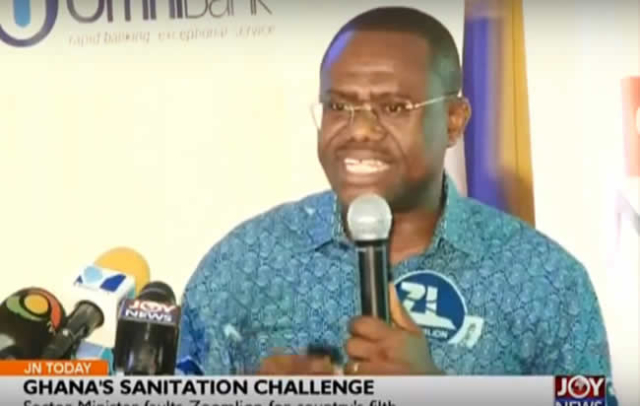 Joseph Siaw Agyapong at a forum in Accra said his company’s quest to rid the city of filth is yielding positive results as the streets are now clean.

As if the laughter was not enough indication that his comment did not represent the current situation, he went on to further explain himself, saying "I said neat because you have not moved to other African countries. When you move to Gambia and other places and you come back to Accra, you think that Accra is the new London.

Mr Agyapong’s comment was a response to Sanitation Minister, Joseph Kofi Adda who accused Zoomlion of failing to live up to its mandate.

He said Zoomlion should be held responsible for the filth that has engulfed the nation in recent times.

The Minister said “Today, being engulfed in filth and finding waste everywhere, I feel a little disappointed and if you were to ask me why this state is so, I will put the blame squarely on Zoomlion.

“Zoomlion to me is the cause of it…because they are not sweeping and collecting every day,” he added.

But Mr Agyapong disagreed. He said his teams do as is expected of them on daily basis.

“We are working,” he said clarifying that, “as for refuse the more you generate and dispose of, people will think that you are not doing the work.”

Zoomlion is one of at least 25 sanitation companies owned by Jospong which enjoys a near total monopoly over government sanitation contracts in Ghana.

Under this contract, Zoomlion claims it has a total of 45,000 sweepers who are paid by the government. The government allocates GHS500 per person, but the terms of the contract allow Zoomlion to take GHS400 and pays the workers GHS100 a month. For 10 years, the government has paid Zoomlion without independently verifying the number of beneficiaries it claims to have.

This contract has cost the state at least 2 billion cedis since it began in 2006. This figure is expected to reach 2.2billion cedis when the contract is reviewed in June 2018.

The Youth Employment Agency has said it will not renew the contract with Zoomlion.

Zoomlion also has the Sanitation Improvement Package (SIP) contract signed with all 216 district assemblies to lift refuse to the dump sites.

The Assemblies had no control over the contract and monies are deducted from their funds straight from the central government source and paid to Zoomlion until late last year when the assemblies were given the opportunity to pay Zoomlion.

The third contract Zoomlion has with the assemblies is the final disposal site contract, which is run by Zoomlion and it's sister company, Waste Landfill Management Limited.

The fifth contract, which Zoomlion has with all the 216 assemblies in the country is a Fumigation contract. Almost every edition of the Auditor General's Report on the District Assemblies Common Fund has made adverse findings against Zoomlion on this contract.

Joy News investigation last year revealed that Zoomlion also had another fumigation contract from the Ministry of Health, which the company said was targeting mosquitoes.

Joy News also discovered that beyond these two fumigation contracts, the Ministry of Local Government and Rural Development awarded a GHS98 million contract to 11 companies, including Zoomlion to do fumigation for 20 days. All the 11 companies belong to Joseph Siaw Agyeong of the Jospong Group.