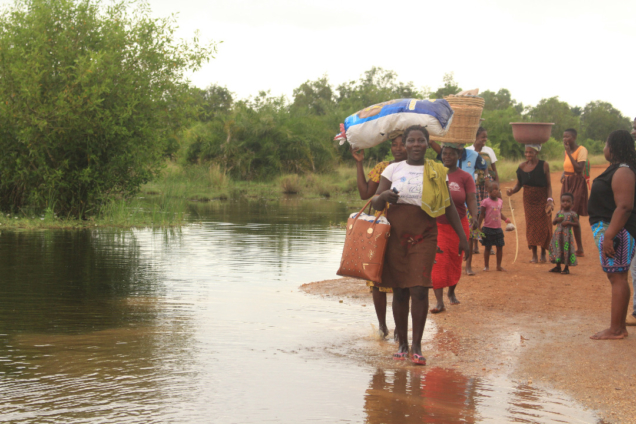 Residents of the Aglokpovia community in the Volta Region have lamented the bad nature of the roads linking them and other farming and fishing communities, making life difficult for them.

A visit by JoyNews to the Aglokpovia community saw the road linking them to the main towns in the South Tongu District as well as other communities cut off as a result of floodwaters during the raining season.

School children on daily basis have to cross the floodwaters to school. The kindergarten pupils therefore risk their lives to have access to education.

Currently, residents including the elderly pregnant women risk their lives crossing the flooded roads, especially when the rains become heavier.

According to the residents, there are no bridges or alternative routes to the other communities that they can use to transport their goods to the nearby communities and bigger towns, both in and outside the South Tongu District.

According to the residents, an urgent attention is needed to avoid anything disastrous in the future because the road gets submerged at the slightest rainfall. This compels residents to walk through the floodwaters.

The Assembly Woman of the area, Victoria Dzeklo lamented how the residents, especially the traders and market women suffer while crossing the water.

Madam Victoria Dzeklo also noted that a citizen of the Aglokpovia living in Accra had to build a school in the town for the kindergarten and lower primary pupils to help prevent them from risking their lives crossing the floodwaters each time it rained.

She noted that market women suffer a lot carrying food stuffs through the flood to the markets, a situation she said is very worrying and needs urgent attention from the government.

“Our women in this community suffer a lot because of the bad roads and flooded roads and they carry food stuffs and walk through the floodwater to the market all the time, “ she said.

Speaking to JoyNews, some school children said they have had to sit home for days when the river in the community overflows and splash to the roads while those at the basic level are sometimes carried on the shoulder to cross.

“We sometimes sit at home without going to school, especially when it rains. And because the situation has been like this for years, it has greatly affected us academically and makes the lives of our parents very difficult” a student lamented.

The school children are however appealing to government to help fix the road network so they can easily access education.

A community leader and a youth leader, Zikpuitor Alorwordor kudormor and Mathew Wegba Akorli also complained bitterly of the plight of the community.  They also asked government to do something very urgent about the situation.

Aglokpovia in South Tongu is only 2 meters / 6.56 feet above sea level, so if the sea rises 2 meters, it will be underwater and completely uninhabitable.

DISCLAIMER: The Views, Comments, Opinions, Contributions and Statements made by Readers and Contributors on this platform do not necessarily represent the views or policy of Multimedia Group Limited.
Tags:
Aglokpovia
South Tongu district
Volta Region