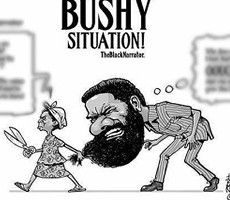 I’m back in town. It was a good rest. The environment was serene. For the whole period that I was in America, I never saw an open van with mounted speakers selling CDs of already faded and cash strapped gospel artistes on our streets.

I never saw one, NEVER. It was calm. I never saw a single litter or filth anywhere-everything was clean. You don’t see that stinky Odon) like river anywhere in that country, so I managed to breathe well. Maybe the only time I experienced pungent smell was at the loo and don’t ask me why.

Not that I’m complaining but I hate being here-I mean being in this country. I love my job but I hate the fact that people often find my actions wrong. I honestly don’t get it. That’s why it surprises me that people are still talking about the hockey pitch saga.

I had barely left the security checkpoint at the airport when I saw fingers pointing at my direction. I felt embarrassed, to say the least. The decision to rename the pitch after the late President Mills was done with the full knowledge of some big men in government. I don’t want to spills the beans but some people want me to. I have restrained myself but people are getting on my nerve-including him.

I’m not pleased at all with the way he dragged me-like a strayed goat-to the house of Theodosia Okoh to apologise to her. I had no plan to apologise to the woman, not today or even in the future. I thought I was coming home to rest before going back to the office. I was on my way to see a friend when a call came through from one of his boys that the ‘oldman’ wants to see me.

I nearly insulted the boy. How old is he, anyway! But I paused and reflected before driving to the Flagpole House. It was there I first got to know about rendering this apology thing. I was not happy but didn’t have the balls to tell him. He is my boss and any disrespect to him means I’m losing my job.

Before we left, PB, one of his boys, had the effrontery to tell me to pack some items including tins of milk, toilet rolls into the booth of the car. I found his directive very offensive. A whole Mayor of Accra being asked to pack items into a car booth? I stood there shaking my head. All shall pass, I said to myself.

These guys have no respect for me at all. Where did I go wrong? Are they now saying honouring the late President is wrong? Is that how I’m going to be remembered when my time comes? Nipa Ye Bad!!

I want to reiterate that the decision to apologise to the woman was not mine. I’ve got nothing to do with it. But like I’ve always said: ‘All Shall Pass!

Until then, enjoy the filth!