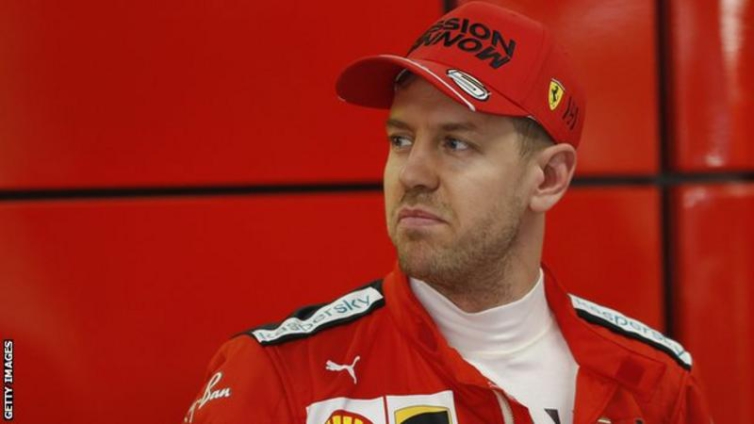 Sebastian Vettel has been at Ferrari since 2015

Vettel, 33, is moving to the team currently known as Racing Point from Ferrari, who earlier this year decided not to offer the German a new contract.

Aston Martin said signing Vettel was “a clear statement of the team’s ambition” to establish themselves at the front.

“It’s a new adventure for me with a truly legendary car company,” said Vettel, who replaces Sergio Perez.

A statement from Aston Martin said Vettel had signed for “2021 and beyond” but did not confirm the length of the contract.

Typically, it would be expected the German has signed a three-year deal.

Vettel said: “I’m extremely proud to say I will become an Aston Martin driver in 2021.

“I have been impressed with the results the team has achieved this year and I believe the future looks even brighter.

“The energy and commitment of Lawrence [Stroll, the owner] to the sport is inspiring and I believe we can build something very special together.

“I still have so much love for Formula 1 and my only motivation is to race at the front of the grid. To do so with Aston Martin will be a huge privilege.”

Team principal Otmar Szafnauer said the team were “hugely excited” by the news.

“Sebastian is a proven champion and brings a winning mentality that matches our own ambitions for the future as Aston Martin F1 Team,” he said.

“On a Saturday or Sunday afternoon, Sebastian is one of the best in the world, and I can’t think of a better driver to help take us into this new era. He will play a significant role in taking this team to the next level.”

Reputations to establish and revive

Racing Point have made a huge leap forward in 2020, emerging with the third-fastest car on the grid – although they have been surrounded by controversy for copying the 2019 Mercedes.

Last month they were docked 15 points and fined 400,000 euros for illegally copying Mercedes’ 2019 brake ducts and using them on their 2020 car. The case has led to rule clarifications for next season that are aimed at preventing such wholesale copying of one team’s car by another ever happening again.

Vettel is one of the most successful drivers in the history of F1.

His 53 race victories is a tally surpassed only by Michael Schumacher and Lewis Hamilton, and only Schumacher, Hamilton and Argentine Juan Manuel Fangio have more titles than him.

The Aston Martin name is entering F1 next year after both Racing Point and the famous sports car company were taken over by Stroll, a Canadian billionaire businessman.

The 61-year-old rescued the F1 team from administration in 2018 and earlier this year took over Aston Martin, which had been lurching from one financial crisis to the next for some time.

Stroll made his fortune in fashion but has had a lifelong fascination with F1 and has a large collection of classic cars.

Signing Vettel required the severing of Perez’s contract. The Mexican, who brought money to the team from his financial backers, last autumn signed a contract with Racing Point until the end of 2022.

But Ferrari’s decision to dispense with Vettel, made before this season had even started, changed the landscape of the driver market and Stroll viewed signing him as too good an opportunity to miss.

However, Vettel’s reputation is not what it was, after three difficult years at Ferrari.

Vettel won four consecutive titles with Red Bull from 2010-13 and joined Ferrari in 2015 after a year in which his new team-mate, Daniel Ricciardo, had beaten him.

Vettel helped build Ferrari until they were title contenders against Hamilton and Mercedes in both 2017 and 2018, but each year they fell short, partly because of a string of errors by the driver.

These continued into 2019, when he was joined in the team by the highly rated Charles Leclerc.

Like Ricciardo, Leclerc beat Vettel in his first season with the team, even though the senior man started the year as the team’s official number one.

In addition, there were a series of flashpoints between the two drivers as they battled for supremacy, culminating in them crashing out of the Brazilian Grand Prix together.

Ferrari decided to commit to Leclerc as their team leader and viewed Vettel, as a proud and successful champion, as too big a distraction. So they decided not even to enter into negotiations with him and signed Spaniard Carlos Sainz instead.

As such, while Vettel joining what will become Aston Martin is a huge coup for a team that was originally established as Jordan in 1991, it is also a chance for Vettel to rebuild his reputation in a new environment.

DISCLAIMER: The Views, Comments, Opinions, Contributions and Statements made by Readers and Contributors on this platform do not necessarily represent the views or policy of Multimedia Group Limited.
Tags:
Aston Martin
Ferrari
Formula 1
Sebastian Vettel