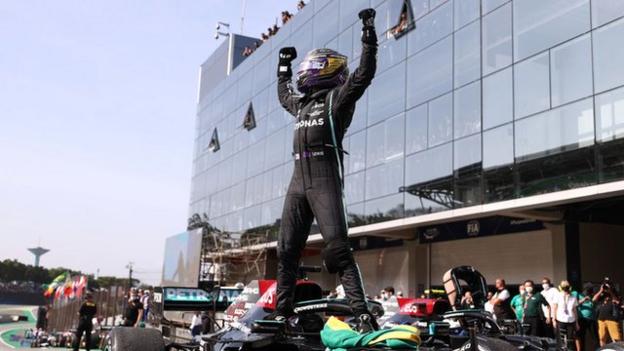 Lewis Hamilton passed title rival Max Verstappen after an intense battle to take one of his greatest victories and win the Sao Paulo Grand Prix.

Hamilton took the lead with 12 laps to go after fighting up from 10th place on the grid and cut Verstappen’s advantage in the championship to 14 points.

His move on Verstappen came 11 laps after the Dutchman forced him off track when Hamilton made another attempt.

His victory came after starting 20th and last for Saturday’s ‘sprint’ event.

It was a gripping conclusion to a weekend of bitterness and rancour between the two teams contesting the championship, and controversy both on and off the track.

The 101st victory of Hamilton’s career sent a powerful message of intent and is a potentially critical moment in the championship.

Had Verstappen held Hamilton off, he would have been able to finish second behind the Mercedes driver at the three remaining races in Qatar, Saudi Arabia and Abu Dhabi and still win the title.

Now, the title race is wide open and the two head to the Middle East with everything to play for.

What a performance from Hamilton

It was a remarkable drive from Hamilton, who had spoken on Saturday of being “devastated” when he found out that morning that he had been disqualified from qualifying for a rear wing infringement – after Red Bull had complained about the wing and asked the FIA to investigate – and would start from the back of the grid for the short sprint event rather than pole position.

Hamilton and Mercedes felt hard done by, feeling that governing body the FIA had unfairly changed the way they deal with broken parts on cars, and the decision seems to have fuelled Hamilton’s desire.

After a superb performance in the ‘sprint’, in which Hamilton climbed up from 20th and last to finish fifth, the seven-time champion had to start the grand prix 10th because of a five-place grid penalty for taking a fifth engine, when only three are allowed per season.

The two penalties meant Hamilton effectively had a 25-place grid penalty, but he came through for a spectacular victory.

A win looked unlikely, despite Hamilton’s startling pace in the sprint, but he set off with that clearly in his sights.

Hamilton was up to sixth at the end of the first lap, fourth behind team-mate Valtteri Bottas after three laps, and then third behind the two Red Bulls of Verstappen and Sergio Perez after the Finn was ordered to let him through the next time around.

After a safety car, Hamilton chased Perez and passed for second at Turn One on lap 19 and then set about Verstappen.

Through two sets of pit stops, there was debate over the radio at Mercedes between the drivers and the team as to whether they had made the right strategy choices, but it meant Verstappen and Hamilton had a straight fight over the final 27 laps, the Mercedes driver with a three-lap tyre wear advantage.

Hamilton made his first attempt to pass Verstappen on lap 48, with 23 to go, and the move ended in controversy,

Hamilton was ahead on the outside as they entered the corner, but Verstappen launched up the inside and forced the Mercedes wide and both left the track.

The stewards looked into the incident but decided no investigation was necessary, much to the annoyance of Mercedes, who felt Verstappen had broken the rule that forbids drivers from forcing a rival off the track.

After that, Hamilton bided his time, giving his tyres some breathing space, and then attacked again, and 11 laps later was back on Verstappen’s tail.

He forced the Dutchman to defend into Turn One, which slowed the Red Bull’s exit, and this time Hamilton was closer still as they entered the back straight.

Verstappen defended to the inside, but Hamilton’s over-speed took him past the Red Bull before the braking zone and he squeezed to the inside so his rival could not defend.

What about the rest?

Almost irrelevant, it seemed, after such a gripping fight for the lead, Bottas made it a one-three for Mercedes, ahead of Perez, who Red Bull pitted at the end to steal the point for fastest lap from Hamilton.

Charles Leclerc took fifth for Ferrari ahead of team-mate Carlos Sainz, the team further extending their advantage over McLaren in the fight for third in the constructors’ championship.

Alpha Tauri’s Pierre Gasly was seventh, from the Alpines of Esteban Ocon and Fernando Alonso and McLaren’s Lando Norris.

“We tried everything we could,” Verstappen said. “It was a good battle but we just missed a bit of pace. It was good fun. We still have a good lead. Today was a bit of damage limitation and I am confident in the coming races we will bounce back.”

Hamilton said: “What a race. The team did an amazing job. I was pushing as hard as I could. From last on the grid and then another five-place penalty was the hardest weekend I’ve had.

“My dad reminded me of 2004, F3 in Bahrain, where I started last and then 10th and finished first.

“Coming into the weekend, I never thought we would be able to close the gap like we did today, things kept going against us. But it just shows that you have to keep pushing and never, ever stop fighting.

“That’s how I’ve approached this weekend.”

Another weekend, another race, as F1 flies almost halfway across the world to Qatar, for the first grand prix in the Middle Eastern country.