Full story: How an Indian businessman was deported twice in less than a year 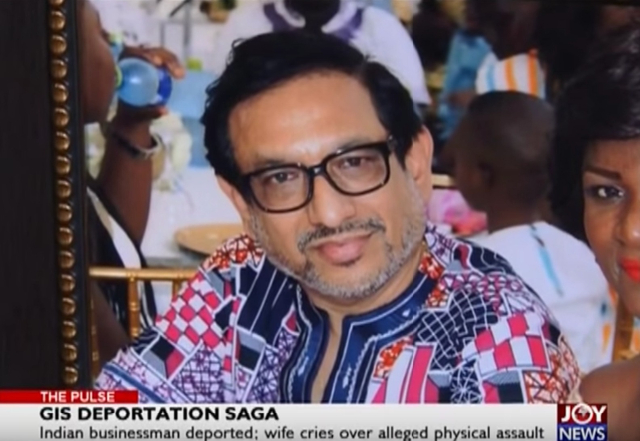 An Indian businessman has for the second time in less than a year been deported from Ghana over a fake marriage certificate.

Ashok Sivaram had his home invaded Sunday morning by some six Immigration Officers who bundled him out of the residence before finally deporting him.

The wife of Sivaram, whose marriage with the businessman is in contention, told Joy News she was assaulted, an incident which has left her completely traumatized.

In tears, Gifty Adanka told Maxwell Agbagba she does not feel safe as a Ghanaian married to an Indian.

According to her, the officers used concrete slabs to break the door of their residence, twisted her arm, pushed her onto the couch and forcibly took away her phone before finally grabbing her husband.

“I feel mistreated. I feel like a Ghanaian being mistreated in my own land; I feel like they don’t even take me into consideration. I am a Ghanaian and I don’t know if the law protects Ghanaians.

Gifty Adanka is the wife of Ashok

“I don’t know whom the law is supposed to be protecting. It’s unbelievable that I will be treated like that. It’s crazy” she said in sobs, eulogizing her husband as a nice person who cannot harm a fly.

But there appears to be more to the deportation than just a fake marriage certificate.

Ashok Sivaram, was involved in a legal battle with a business partner, Sachin Nambeear, also an Indian who was a Director, 50% Shareholder of Jai Mai Communications Limited.

Sachin Nambeear, filed a suit on January 24, 2017, at the High Court, Commercial Division 7, against Ashok Sivaram accusing him of breaking his fiduciary duties to the company and demanding damages for same.

On May 5, 2017, the High Court, Commercial Division, appointed Messrs Ernst & Young to go into the account of Jai Mai Communications Limited, for the purposes of valuing the assets of the Company, monies, its liabilities.

Even before the valuation will be completed, Ashok Sivaram was arrested by CEPS officials and deported on June 1, 2017, with an order from the Interior Ministry.

Sivaram told Joy News his business partner had threatened to have him deported and was not surprised by the action.

Shortly after he was deported, the Indian businessman returned to Ghana with multiple suits against the Immigration Service head and the Interior Minister.

His lawyer Gary Nimako challenged the basis under which his client was deported, arguing Sivaram could not have been deported merely on the basis that he had acquired a fake marriage certificate.

“That fraud can only be established by a Court of Law after evidence of same has been led and proof thereof established beyond reasonable doubt,” he argued in a writ filed against the two Respondents.

The Court upheld the arguments of Mr Nimako, and ordered the Interior Minister and the Immigration Service to reinstate and residence and work permits of the businessman.

On his return to Ghana, however, Ashok Sivaram was arrested at the Airport by Immigration officials and detained. He was released upon a court order.

Even as the plaintiff was battling to have his work and residential permit restored, the Immigration Service proceeded to the Appeals court and later to the Supreme Court to challenge the decision by the High Court.

According to the Supreme Court, the High Court judge erred in her decision to order the restoration of the work and residential permits.

The Justices of the Supreme Court noted that the plaintiff did not exhaust all administrative processes before he proceeded to court for the restoration of his permits.

In a unanimous decision, the justices ruled that the high court overstepped its bounds in taking a decision on the matter.

The decision by the Supreme Court may have buoyed officers of the Immigration Service to stage another deportation act.

The Immigration Service and the Interior Ministry have been silent on the Sunday’s action by the six Immigration Officers.

The lawyer for the businessman has also not been available for comment.

Meanwhile, some workers of Ashok Sivaram's company have staged a demonstration demanding the return of their employer.

The said the action by the Interior Ministry will lead to loss of jobs.