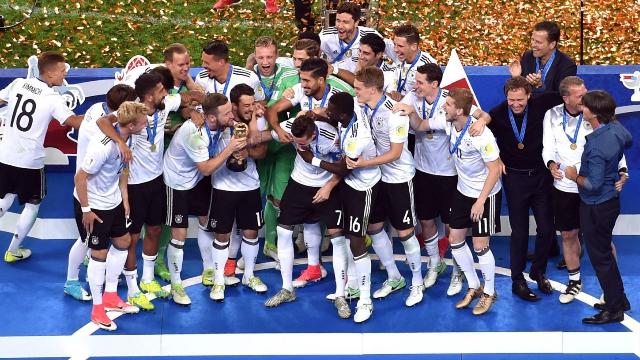 Germany defeated Chile 1-0 in the final of the Confederations Cup amidst more controversy over the VAR system.

Chile dominated much of the first half, with their energy and pressure giving them shots in and around the box from the opening stages. Arturo Vidal forced a good save from Marc-Andre ter Stegen.

However, Germany took the lead when a defensive error gave Lars Stindl a simple tap-in, and Chile could not find their way back.

In the second half, Chile should have been down to 10 when Jara aimed a clear elbow – reviewed on VAR – into Timo Werner's head, but the ref elected to give a yellow card.

Chile applied more pressure as the game came to a close, throwing on more attacking players in the last 10 minutes, but Germany hung on calmly to claim the title with relative ease save for a super Ter Stegen save from an injury time free kick from Alexis Sanchez.
TALKING POINT

What is the point of VAR if referees continue to put players in danger? Werner could have had his jaw broken by Jara's elbow, but he received a yellow despite a VAR review. There will rarely be a more obvious red card. VAR should let players know that there is no chance to escape punishment for things like this, but still referees won't send players off for obvious violence.