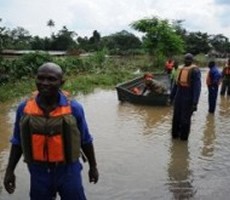 Ghana’s economy has lost an estimated GHS 140 million ($70 million) to disasters, according to the Center for Disaster Resilience and Leadership Studies of the University of Health and Allied Sciences.

Director of the Center, Dr. Ishmael Norman, stated that every 2 hours and 15 seconds a catastrophic fire occurs somewhere in Ghana and advocated for a serious behavioral change on communities and leadership of the country.

He told Joy News the many fire outbreaks are now becoming a key economic issue.

According to Dr Norman the estimated GHS 140 million spent on disasters is the cumulative cost for only fire damage intervention between September 2004 and September 2012 but the cost for general disaster intervention could be more, especially during floods in the Northern region.

“The reason why you don’t see a lot of these cost is that money given for a lot of these emergency interventions is not often accountable”, Dr Norman said.

Dr. Norman was addressing a day’s workshop on Disaster Resilience Studies at the Dungu campus of the University for Development Studies (UDS), which was mainly attended by lecturers of the UDS.

The workshop was aimed at mapping curricula of the UDS to incorporate disaster resilience studies and eventually develop degrees and post graduate programmes in disaster risk management courses to enable the country to fully deal with perennial disasters.

Disaster Resilience Studies is a new programme being funded by the USAID and spearheaded by the Tulane University in the USA, to systematically strengthen global humanitarian and disaster risk management leaderships in some selected global universities.

He also observed that more than half of the staff of NADMO does not have expertise to deal with disasters adequately.