GHPL: How Inter Allies spotted and made Victorien Adebayor 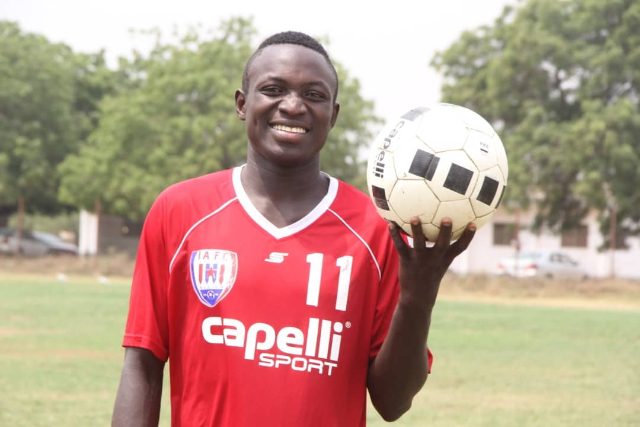 Just name it and it would usually be done effortlessly. Sometimes, it only takes a second to decide a game; that second could be ecstasy unconfined or tearful.

The architects of the seconds that define the mood often need a run of games to be noticed. But for Victorien Adebayor, that fateful evening at the Nduom Sports Stadium in Elmina, where he dragged a 10-man Nigerien national team through to the semi-final of the 2017 WAFU Cup of Nations in their last group game against Benin, would be one he would reminisce with a grin.

That night would be a day the scouts of Inter Allies would pat themselves at the back and say, ‘we found a jewel.’ Whoever identified him deserves a 100% pay increase. Whoever found him deserves an acknowledgment from the football gods. When Ghanaians had their sights on lifting the WAFU Cup of Nations trophy on home soil, Inter Allies had their sights on spotting the best talents West Africa had assembled from their domestic competitions.

Allies found that in Adebayor, a joint top scorer of the competition with three goals, only eclipsed by Stephen Sarfo because the Ghanaian was handed the Golden Boot. The 23-year-old treats football with so much kindness that it is embarrassing to categorise him under the umbrella of talented footballers.

That is a mockery of what has been bestowed on him. And if there is another word that better defines what he has got in his feet, that would suit him. He is filled with an arrogance of football abilities that only few players are privileged to have. When Adebayor made his debut against Bechem United at the Tema Stadium on March 17, 2018 in the Ghana Premier League, he wowed football loving fans and they accompanied his elegance and artistry with applause.

He struck a sumptuous free-kick to cap of a superb performance that won him much admiration. Before that, keeper Prince Asempa had tipped the Nigerien’s first free-kick over the bar, a save that was in contention for save of the season (if the season had ended without ‘Number 12’ intruding). But, Allies man couldn’t be denied a second time. When Asempa’s wall anticipated him to hit the ball over the top, the winger deceived them and hit it low for his second goal of the game.

The first, he had dribbled past his opponents as if they were not there. Two goals and a Man of the Match award. That was how he announced his arrival in Ghana’s top flight. He would go on to score five more goals in 11 matches, totaling seven goals in 12 games, adding two Man of the Match awards to the first. Ghanaians were denied the opportunity of seeing him more when Anas Aremeyaw Anas and Tiger Eye PI dropped ‘Number 12’ to sanitise the football industry. It, however, did not stop most footballers, including Adebayor to pick off. Arguably, however, he’s even been better.

Interestingly, Allies may boast of talents who have taken the Ghana league by storm before, but they have never had a machine whose qualities have gained notoriety nationally like this. Sheriff Deo Mohammed, Ropapa Mensah, Lord Ofosuhene, Fredrick Boateng, Frederick Yamoah, Prosper Kassim and many others, but their qualities were not in the league of Adebayor.

The journey of this season is just nine weeks old, but Adebayor might just be an unstoppable train defenders and coaches would wish never mounted the railway opened by the Ghana FA.

DISCLAIMER: The Views, Comments, Opinions, Contributions and Statements made by Readers and Contributors on this platform do not necessarily represent the views or policy of Multimedia Group Limited.
Tags:
GHPL
Inter Allies