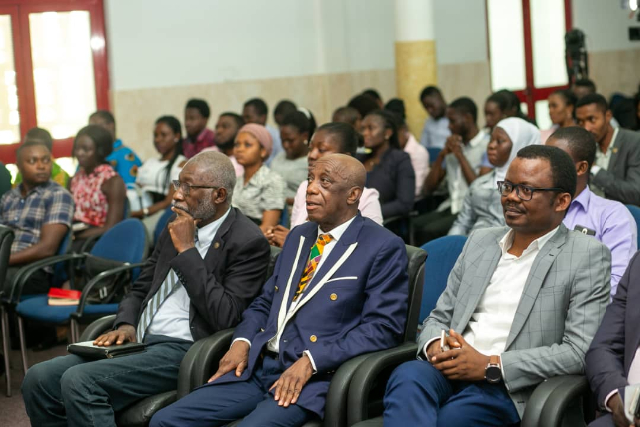 GISPA is the umbrella body of all internet services providers in Ghana.

The conference, held at the Kofi Annan Center of Excellence in ICT on Thursday, October 17, 2019, in Accra, was under the theme: ‘Global Internet Development Lessons For Local ISPS For Business Growth & Affordable Internet Provision.’

It featured a panel discussion with key stakeholders within the internet space in Ghana making valuable contributions to the discussions for the day.

The conference is billed to be organized annually to throw light into development, challenges and opportunities in the internet industry globally and locally.

Delivering a welcome address at the conference, President of GISPA, Richard Densu, expressed the belief that the world has become much more visible and colourful to everyone because of the internet.

According to him, “the internet of today is giving an unprecedented opportunity to everyone of all ages to choose what they want, socialize and promote businesses.”

He noted that the internet revolution also brings with it new forms of progress daily.

The President observed that the internet comes with some challenges including the issues of cyber threats, personal security and safety of governments.

“That is why it is important that we as industry players lead the way in creating platforms such as this (conference) so that we can all come around the table to discuss how we can make the services we provide better for our customers,” he explained.

Mr Densu indicated that GISPA will in the coming months, facilitate these meetings on a regular basis.

“But of course, this Ghana Conference, will become our annual calendar event which we anticipate will get bigger in the coming years,” he disclosed.

“For those of you who are hearing GISPA for the first time, we are an association of all major internet service providers in Ghana,” according to him.

“Our mandate, among others, include the involvement in shaping public policy and advocacy in ensuring that we are able to influence policies that are made to regulate the internet industry,” he emphasized.

Contributing to the discussions at the conference, Professor Nii Narku Quaynor, a leading figure in the development of the internet in Ghana, urged the Government of Ghana to scrap taxes on the internet.

Prof. Narku Quaynor, a founding member of the Computer Science Department at the University of Cape Coast, said the “internet, is just like water or air, you should not be taxing those things and if you tax them it will show. It will affect your development.”

The renowned Professor proposed that government should instead tax the products, services and jobs which have arisen due to the existence of the internet in the country like transport or courier services.

“From my point of view, the internet is so pervasive in so many areas that we really should avoid generating revenue out of it. We should rather focus on the benefits and if there are some successful benefits in services, then you can try and tax those services,” he observed.

He, however, agreed with the government’s move to ensure that for security reasons, all sim cards are properly registered.

But, he disagreed with the directive to have the registration done within a strict timeframe.

To that end, he urged the government to sit with the operators to come up with a gradual approach to the issue.

On his part, Chief Executive of the Ghana Chamber of Telecommunications, Ing. Kenneth Ashigbey, indicated that one of the biggest challenges being faced by telcos in Ghana was fibre cuts.

According to him, “we are currently spending too much money in fixing fibre cuts. We are recording over 300 fibre cuts a month. Last year it cost 45.5 million dollars to fix.”

He added that “this year we are almost above that already. One of our members who has budgeted half a million dollars, not to expand fibre to a village-like Tsiame, but to fix it. After the very first quarter, they had to go back to their board for extra money.”

Meanwhile, Alfred Gaisie of the National Communication Authority (NCA), noted that a key factor in the high data cost was the nature of the content being consumed by internet users in the country.

According to him, most of the content being consumed in Ghana originate from outside the country.

Mr. Gaisie, therefore, urged the production of more attractive local content, which would help drive down cost of data.

An inventor of Fibre Optic technology, Dr Thomas Mensah, told journalists on the sidelines of the Conference that his idea of spreading fibre optic technology throughout the country using a high-speed train network will be realised in the next three years.

According to him, to ensure the realization of this dream, he had managed to lure investments of up to $1.2 billion into the country.

Dr. Mensah indicated that the development of this network was integral to the ‘Ghana Beyond Aid’ agenda of the government.

He explained that “we are going to measure Ghana beyond Aid as to how fast we can travel from place to place.”