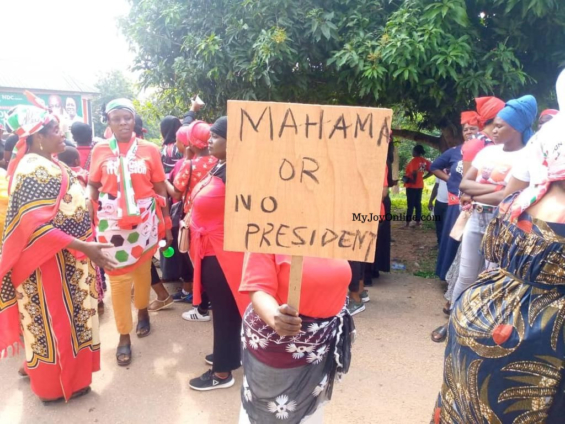 Some Civil Society Organisations including the Institute for Democratic Governance (IDEG) have urged the National Democratic Congress (NDC) to seek legal redress following their unwillingness to accept the outcome of the 2020 general elections.

Speaking at a news conference Wednesday, Dr Angela Dwamena-Aboagye who read the statement on behalf of the CSOs noted that it is only the court that has the mandate to address any issue the NDC has concerning the just-ended election.

“As we have stated before, carrying out demonstrations and going to court are not mutually exclusive nor contradictory. Legal recourse may be pursued even as peaceful demonstrations are carried out.”

“Therefore we join the voices of the sections of the public to urge the NDC to present their concerns to the court for legal redress,” she stated.

Dr Dwamena-Aboagye assured the aggrieved parties that although going to court may appear inconsequential, considering the fact that while the case is being tried, swearing-in of the President and parliamentarians and other processes would take place, only the courts have the constitutional “mandate to effect the necessary changes following their verdict on election-related disputes”.

The CSOs’ comments come after former President John Dramani Mahama and his party say they are unwilling to accept the 2020 election results.

Addressing the press after the Electoral Commission (EC) announced the winner of the election, Mr Mahama said his team had noticed some irregularities in the collation of the ballots.

“I stand before you tonight unwilling to accept the fictionalized results of a flawed election,” Mr Mahama said.

After his address, party members across the country have embarked on demonstrations to protest the results of the presidential election.

The CSOs also urged NDC sympathizers who have embarked on a nationwide protest to seek police protection to ensure their protests are peaceful.

According to Dr Dwamena-Aboagye, it is the political and civil right of all citizens to demonstrate if they disapprove of some national development.

“The members of the political party therefore have the right to express themselves through demonstrations so long as their demonstrations are peaceful.”