Government urged to deal with harmful results of artisanal mining 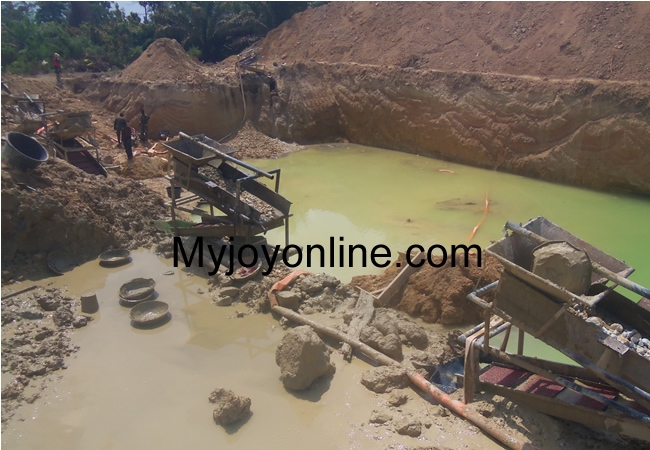 A group of researchers have urged government to intensify efforts to deal with the harmful results of artisanal and small-scale gold mining.
The researchers from Ghana and the United States of America ,working under a sponsored project by the University of Michigan, Graham Environmental Sustainability Institute, said data gathered from their search indicated that there were currently high concentration of mercury, (a chemical used for gold extraction from rocks) in the soil.
The mercury used for gold extractions sinks into the ground, contaminating water bodies, while the indiscriminate diggings by these small-scale gold miners lead to environmental degradation.
They attributed the problem to the lack of effective monitoring and the regulation of these activities.
The researchers said such activities posed serious health and social risks,  and raised environmental concerns not only for people living in the mining communities, but also to the country through the consumption of agricultural produce and human movements from these areas to the larger society.
They said although several attempts had been made in the past, with the aim of minimizing such negative impacts, political will, been a challenge, had prevented the implementation of research recommendations and the enforcement of existing policies and laws.
Dr Nil Basu, Project Leader from McGill University, Canada, at a stakeholder workshop in Accra on Monday said the researchers had since 2012, been working on an integrated assessment of water sustainability, infrastructural inequality and health, in small-scale gold mining communities in Ghana.
According to him, working with the Ghanaian research team proved that the country had all the requisite capacity to deal with the issues raised, more than any other country could.
However, there was the need for an integrated approach and evidenced-based data was important to present a stronger case to push for stiffer policies and government action.
The workshop, which was hosted by the Science and Technology Policy Research Institute of the Council for Scientific and Industrial Research of the Council for Scientific and Industrial Research (STEPRI- CSIR), therefore seeks to share findings and preliminary recommendations with key stakeholders.
This would help get stakeholders inputs for the development of evidence-based and realistic strategies to improve sustainable water access and quality in the context of small-scale gold mining in Ghana.
Mr Mahama Ayariga, Minister of the Environment, Science, Technology and Innovation, said government was putting in place a multi-sectoral team to ascertain the problems posed by indiscriminate artisanal and small-scale mining.
He commended the research team, and pledged to ensure that the recommendations of the meeting and the research were implemented.