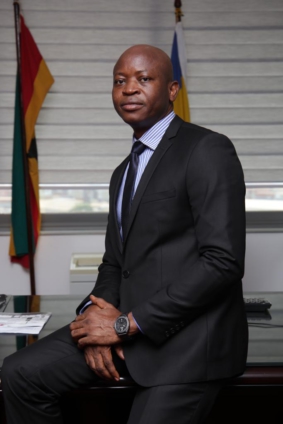 The Ghana Ports and Harbours Authority (GPHA) has sent a congratulatory message to its Director General, Michael Achagwe Luguje on his election as the Vice-President (Africa Region) of the International Association of Ports and Harbours (IAPH).

IAPH is the global alliance of Ports and Harbours, with membership of over 160 Ports and 120 port-related businesses from 87 countries.

GPHA is member of the IAPH, and it is significant that its Director General now holds the position of Vice-President for Africa Region.

Polling 13 votes out of 14, Mr. Luguje, in line with Article 21 of IAPH Constitution, assumes the responsibility until next annual general meeting at the IAPH World Ports Conference in 2023.

From the humble beginnings in Pong-Tamale L.A. Primary School, Tamale and Navrongo Secondary Schools, through the University of Ghana, the World Maritime University and others, Mr. Luguje, has risen through the ranks from the office of the Special Assistant to the then Director General of GPHA to become the West and Central African Regional Coordinator of the International Maritime Organization (IMO), United Nation’s specialised regulatory agency for global shipping and maritime transport.

He also served as one of the longest Secretary-Generals of the Ports Management Association of West and Central Africa (PMAWCA).

In 2017, Mr. Luguje mobilized member ports from the Africa region towards the successful election of Ms. Hadiza Bala-Usman, Managing Director of Nigerian Ports Authority, to the office of Vice-President, Africa Region of the IAPH.

Further to the congratulatory note from the Board, Management and Staff of GPHA, the Chiefs, Elders and Good People of the Kasena-Nankana Traditional Areas, and the Savelugu-Nanton District have expressed pride and joy for this noble son of theirs.

Tags:
GPHA
International Association of Ports and Habours
Michael Luguje
The Ghana Ports and Harbours Authority (GPHA) has sent a congratulatory message to its Director General