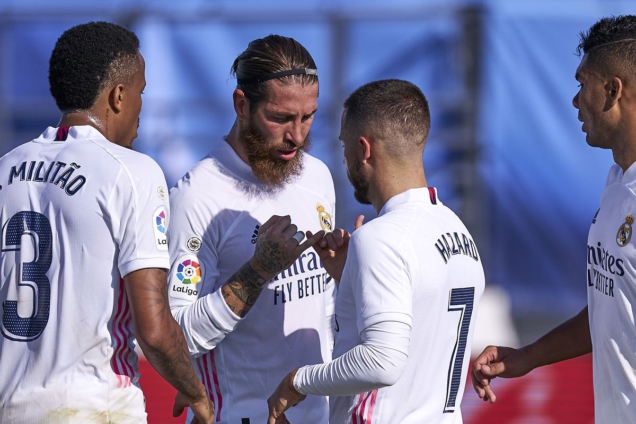 Eden Hazard marked his return to the Real Madrid starting lineup with a stunning strike from distance as the Spanish champions claimed a 4-1 home win over Huesca.

Having made a cameo off the bench in the 2-2 draw against Borussia Monchengladbach during the week, the Belgian was handed his first start of the season and he delivered, opening the scoring after 40 minutes.

Hazard picked up the ball with his back to goal 25 yards out, turned and opened up space for the shot, with his driven effort finding the net. And Karim Benzema doubled Real Madrid’s advantage just before the break, taking down a Lucas Vazquez cross and firing across goal into the far corner.

Benzema and Hazard were also key in Real Madrid’s third goal, with the French striker picking out Fede Valverde at the back post after a counter attack. The Uruguayan midfielder made no mistake in lashing home a finish.

Real Madrid were denied the clean sheet with David Ferreiro got on the end of a Rafa Mir cross into the middle to find the back of Thibaut Courtois’ net, but Benzema scored a fourth late on as the hosts saw out a win which sent them top of La Liga.

DISCLAIMER: The Views, Comments, Opinions, Contributions and Statements made by Readers and Contributors on this platform do not necessarily represent the views or policy of Multimedia Group Limited.
Tags:
Eden Hazard
huesca
La Liga
Real Madrid