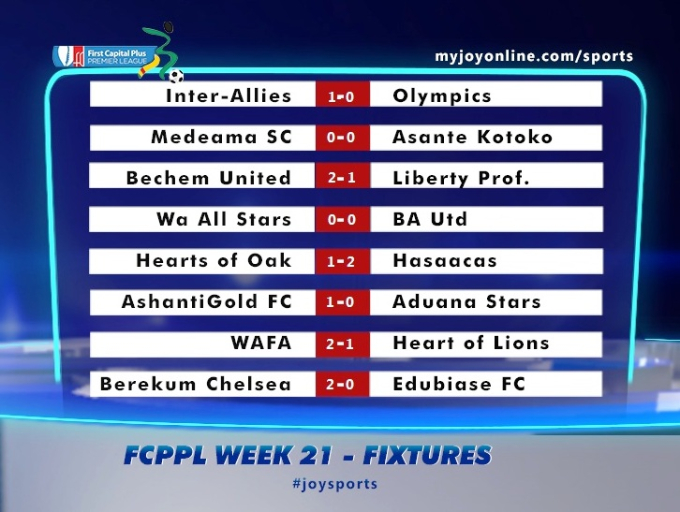 The league passed the 350 goal mark on Sunday as AshGold took another big step to the title, beating second-placed Aduana.

Hearts of Oak failed to benefit from the home advantage as they got stunned by two goals to one on match day 21 of the ongoing First Capital Plus Bank Premier league on Sunday at the Accra sports stadium.

Hasaacas came into the game with the intention of beating Hearts of Oak and their positivity yielded dividend as they struck the first goal in the first minute mark through Emmnauel Ankobeah after he pounced on Frederick Quayeson flick on.

The Phobians tried to restore parity as they committed  more men forward but they got stunned again five minutes later as Emmanuel Ankobeah beat the offside trap to register his second goal on the day.

However, the moment of madness at the Accra sports stadium came in the 10th minute mark when assistant line 2, Badium Alhassan was hit in the head after a 'missile' was thrown from the stands, this caused the game to halt for close to 32minutes.

Play resumed after the long wait, fourth official, Yaw Ametepe replaced the injured official but the Phobians failed to hit the back of the net as the first half was brought to end.

Philip Boampong later pulled one back, but it was just a consolation.

The Mauves and Yellows were seeking their first ever home win over Kotoko, having struggled against the defending champions at home since they marked their Premier League debut in 2010.

They have lost their last five games at the Tarkwa and Aboso Park, culminating in their desire to end the jinx. But the game finished goalless, with the talking point being Ahmed Toure's missed penalty after 89 minutes.

Umar Bashir's goal on the 21st minute was cancelled by Osman Sackey 11 minutes after recess to earn deserving point. WAFA were in command after taking the lead, and could have doubled their advantage, before Osman Sackey's equaliser. Either side created chances to seal a win late on, but nothing more.

A meeting of the two heavyweights in the Volta Region – Sogakope derby, once the pair got into their stride they put on a show of attacking football the fixture warranted, with of end-to-end action. Heart of Lions was the first to test Abaro in the WAFA goal, but he gathered.

However it was the home side (WAFA) who would come closest in the early exchanges, with Ashimeru Majid throug ball finding his Samuel Tetteh, the low shot was feeble and Mozart Adjetey had no worries gathering that, before Mumuni Zakaria worked his way into the box and fired inches wide.

The pendulum swung the way of Lions from there on though, with Quansah and Sackey forcing Abalora into fine saves. On the 21st minute, WAFA found the breakthrough. A quick break saw the ball rolled into the path of Hudu, who sent in a teasing cross into the Lions box and Umar Bashir made no mistake with brilliant header to beat Mozart Adjetey.

Skipper Martin Antwi almost made it two a minute later, but he hushed on a through ball from Zakaria Mumuni and Mozart Adjetey save kept the gap down and Lions flew out of the blocks when they returned. Acquah directed Quansah's cross just wide, before before Avor header forced Alabora into one save the which resulted in a corner.

League leaders Ashantigold have extended their lead on the First Capital Plus Premier League log after their slim victory over second placed Aduana Stars in Obuasi on Sunday. The Miners could have shot into the leadin the first half but Bernard Morrison failed to convert from the spot when Ashgold were awarded a 40th minute penalty.

Ashgold are now leading the League log with 40 points while Aduana have dropped to 4th with 32 points.

In another match played at the Bechem Park, Liberty Professionals suffered a 2-1 defeat to Bechem United in their Match day 21 clash.

Coffie scored in the 32nd minute to see the first half end 1-0 in favor of the home side before substitute Issah Nyamewero doubled the lead for United.

Former Ghana U20 star Kennedy Ashia pulled one back for Liberty Professionals after he converted from the spot in the 80th minute.

The results has seen Bechem United move to 11th on the League log with Liberty now 8th.