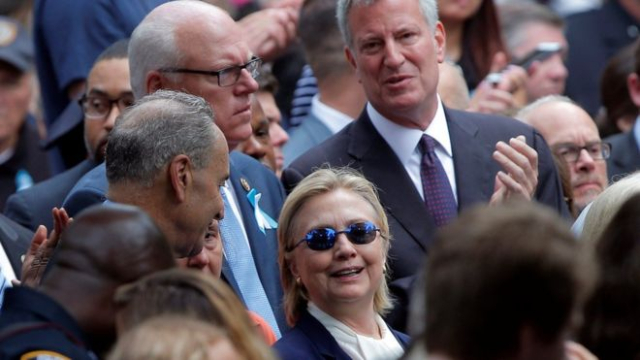 US Democratic presidential candidate Hillary Clinton says she is "feeling great" hours after her early exit from a 9/11 ceremony raised health fears.

Her campaign said earlier she had left the event in New York because she had "felt overheated" and had gone to her daughter's apartment.

Her doctors say she made a full recovery from surgery she underwent in 2012 for a blood clot.

Mrs Clinton's personal doctor Lisa Bardack said last month she was "in excellent health and fit to serve as president of the United States".

The Clinton campaign has accused opponents of pushing a "deranged conspiracy about Clinton's health".

She later left for her home in Chappaqua, New York, according to her campaign.

A video posted on Twitter purports to show Mrs Clinton being supported by aides at the 9/11 ceremony before being helped into her van.

The statement from the Clinton campaign said: "Secretary Clinton attended the September 11th Commemoration Ceremony for just an hour and thirty minutes this morning to pay her respects and greet some of the families of the fallen.

"During the ceremony, she felt overheated so departed to go to her daughter's apartment, and is feeling much better."

Mrs Clinton previously served as secretary of state and retains an honorary title.

The weather was warm and humid in New York on Sunday, and there was a breeze during the ceremony, the Associated Press reports.

The candidate came to the ceremony fresh from a political storm over comments she made about Mr Trump's supporters at a fundraiser on Friday.

She had apologised on Saturday for suggesting half of the Republican's supporters were "deplorables".

Mrs Clinton is next due to appear on the Ellen DeGeneres Show on Wednesday and attend a rally in las Vegas on the same day.

George HW Bush once vomited on a Japanese prime minister. His son fainted in the White House after nearly choking on a pretzel. Franklin Roosevelt hid his serious health conditions, and John F Kennedy never spoke of his debilitating back condition.

The difference between these men and Hillary Clinton, however, is that her "overheating" episode comes in the home stretch of a presidential campaign where she seeks to tie Ronald Reagan as the oldest person ever elected to a first term as president.

Then there are the conspiracy theories about her health – some of them advanced by top Trump campaign surrogates – which will only become more prominent, particularly after Mrs Clinton left her press pool in the dark for more than two hours on Sunday.

Age has been a factor in several recent presidential elections. Both John McCain in 2008 and Bob Dole in 1996 would have easily shattered Reagan's record. Donald Trump, at age 70, has his own health questions to address.

Sunday's episode may end up being simply an annoying distraction for the Democrats. Now, however, people who would otherwise have shrugged off Mrs Clinton's health rumours will be watching her activity more closely.

Services marking the 15th anniversary of the 9/11 attacks have taken place in New York and around the world throughout Sunday.

A total of 2,996 people died on 11 September 2001 when al-Qaeda militants hijacked four planes, crashing two into the World Trade Center's twin towers in New York, a third into the Pentagon and the fourth into a field in Pennsylvania.

Passions are high just over two weeks before the first election debate between Mrs Clinton and Mr Trump on 26 September.