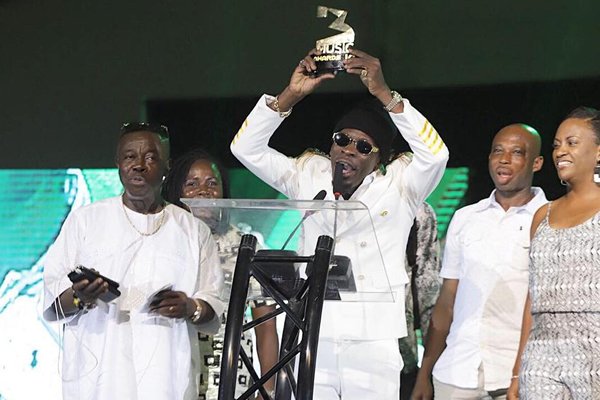 Dancehall musician Shatta Wale says he will flush all 11 awards he won at the 2019 edition of 3 Music Awards down the WC.

This comes after the CEO of 3 Music Networks, Sadiq Abdulai Abu, charged the musician to return all 11 awards he said the singer didn’t deserve.

In an interview with Joy Entertainment’s Ibrahim Ben Bako, the ‘Kakai’ hitmaker said, “I will flush the awards in the toilet.”

When asked if he felt he deserved the awards, he said,“I know I deserve them but Sadiq wants to behave like Chatter House. Sadiq, I’ve fought wars, and I’ve won them so don’t bring this.

“We’ve done what we have to do, and he has to apologize to the artiste and the industry, that’s the best thing I expect him to do.”

Shatta Wale also alleged that he invested ¢100,000 in the awards event as his way of supporting Mr Abu.

“He shouldn’t come and say that I should return the awards because if I ask him to pay me, he can’t pay me. That day, I supported him; I even gave him ¢100,000 to do the show as well.”

The genesis of this story can be traced to some few days ago, when the ‘My Level’ hitmaker made some allegations against Sadiq, suggesting that the awards given him was not based on merits.

On his IG stories, Shatta Wale wrote, “Sadik do you remember telling me that the 3Music Awards you will give me 11 awards because Sarkodie and Stone deh bore you. We didn’t do well, but now I am doing well by speaking the truth [sic].”

But in response to this, Sadiq, in an interview with Prince Tsegah (Da Don) on ‘Usay Weytin’ on Hitz FM, said;
“If he feels that in 2019, he didn’t deserve 3 music awards, it’s fine, I’m sure the board can consider it so he can return it, and probably also carry the tears he shed on the stage as well [sic].

“I didn’t shed that tear; I wasn’t the one who gave a speech. In fact, by the time all that was happening, I was in the hospital, but I’ve said to you again and again that I have never dealt directly with Shatta Wale on anything relating to 3Music Awards, and there’s a reason[sic].”