I sold all I had to go to Europe – now I’m home, and broke

More than 3,000 Nigerian migrants who failed to reach Europe, have been flown home by the International Organization for Migration. Many sold everything to make the trip and aren't sure how to face their families, writes Colin Freeman.

Evans William tells me he sold everything but the kitchen sink to fund his dream of getting to Europe. And I mean everything – his bed, his fridge, his TV, his spare clothes and his mobile phone. After borrowing yet more cash, he finally had enough to pay a smuggling gang to take him from Nigeria across the Sahara to Libya.

In all, it cost him £750 ($1,000), but he wasn't worried. Once in Europe, he figured, he could quickly earn enough to pay off his creditors, and eventually return home to start a business of his own.

It didn't quite work out like that. After six miserable months in Libya, where the gang forced him to work for nothing, he finally boarded a rickety boat to cross the Mediterranean. It got stopped by the Libyan coastguard, who threw him and 140 other passengers into a detention centre.

By then he'd had enough. When I met Evans last month, he'd just returned home to Benin City in southern Nigeria, where he was among hundreds of migrants staying in a government-requisitioned hotel.

They'd been flown back by the International Organization for Migration, a UN body that helps illegal migrants who want to return home.

As well as a free plane ticket, they get a few nights' hotel accommodation, and £200 in pocket money while they find their feet. They're also offered job training, to give them a better chance of a livelihood.

The scheme is partly bankrolled by a £3bn fund set up by the European Union in 2015, the year the migrant crisis dominated the news. 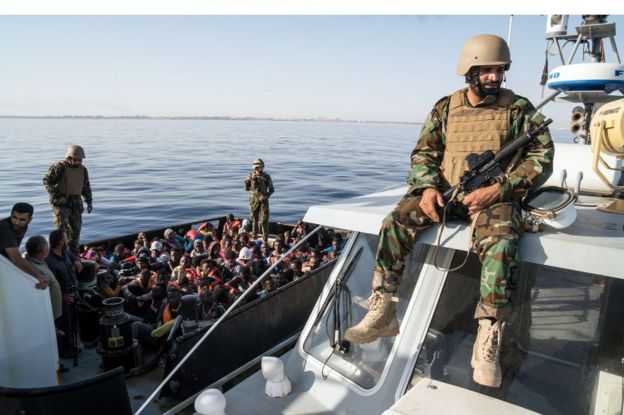 The EU hopes that by offering migrants better prospects in their own countries, they can be persuaded to leave Libya – where up to 700,000 are still thought to be waiting to cross the Mediterranean to Europe – and turn back.

More than 3,000 Nigerian migrants have already returned, and a further 20,000 are due to do so this year.

Yet for those who take up the offer, arriving back home can be a depressing experience.

Most, like Evans, are virtually destitute. And while they appreciate the offers of job training, it's fairly basic stuff, like hairdressing or tailoring, or learning how to farm. For those who dreamed of making it in Europe, that's a bit of a comedown.

What also hurts, though, is the feeling that they'll be seen as failures by their peers and relatives. Many could only make the trip because mum and dad sold off the family silver. Nobody wants to come back penniless, and admit that they blew what's seen – rightly or wrongly – as the chance of a lifetime.

Evans, for example, doesn't even want to go back home – even though it may be the only place he'll get a bed once his pocket money runs out. 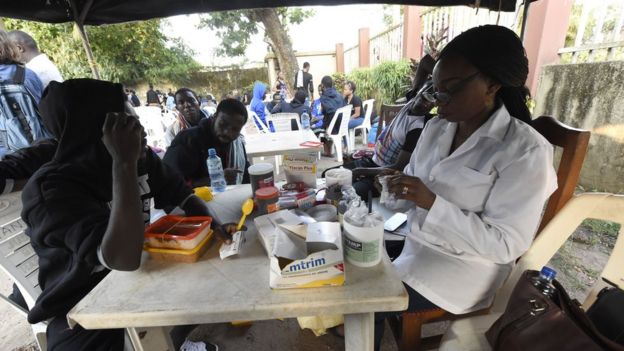 "I still don't want to stay in Nigeria," he tells me. "Although next time, I'll try to go to Europe by legal means."

Gloomier still was Abibu, a tough-looking young man who was on the same flight home as Evans. He had a fresh-looking scar on his face, and a scowl that deepened as he talked.

His mother, he said, had sold her only plot of land to fund his trip to Europe. He hadn't even told her he was back.

"If my mum sees me she'll get sick with worry," he said. "And all the neighbours, saying, 'This guy's mum sold her land so he could go to Europe – and then he failed!' If I hear anyone saying that, I tell you, I'll kill them."

So what was he going to do now, then?

"Well, first I'll need to get my money back. The pocket money I got is just a fraction of what I spent getting to Libya." 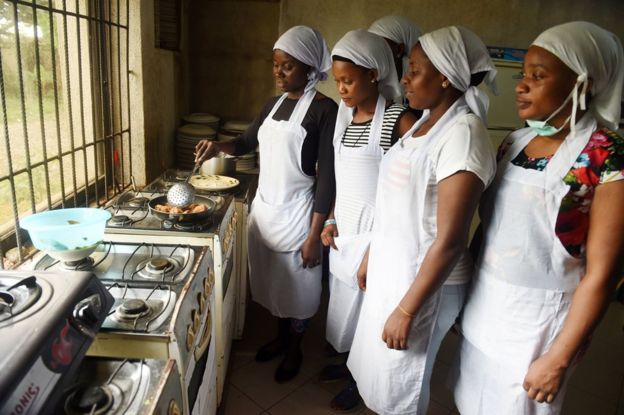 Women learn to cook at a non-governmental organisation in Benin, Nigeria

Which of the training opportunities did Abibu fancy? Hairdresser? Farmer? He seemed to have other work in mind. "I'll look at the offers," he admitted grudgingly. "But I'm worried I'll end up committing crime to get the money back."

Really? What sort of crime?

He sounded like he meant it, and I found myself wondering just what Abibu had done to get that scar on his face. As we said our goodbyes, my Nigerian colleague, Peter, who's also a church pastor, felt it was time for a word.

"It was your decision to go – don't blame others," he told Abibu. "And reconnect with your mother – at least she'll be happy to hear you're still alive."

Will she, though? Two years ago, in a migrant detention centre in Libya, I had met an inmate from The Gambia, who had asked me to pass on just such a message to his family.

When I rang them, I expected tears of joy.

Instead, they had just one question: "So what, he's not made it to Europe then?"