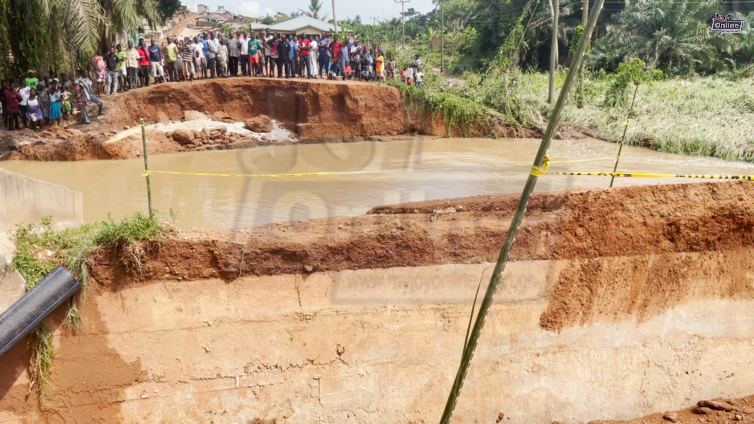 Roads Minister Kwesi Amoako Atta has assured Central Region residents that all broken bridges and roads that caved in as a result of the floods in some parts of the region would be fixed within 24 hours.

Residents have been battling with the impact of the floods that have killed one person, submerged an inestimable number of houses and displaced many.

The flood waters are receding gradually, and many who couldn’t access their homes for days can now do so.

At Amamoma, where many students and workers were trapped in their homes for 3 days, the road is now clear such that people and vehicles can access them.

Schools in the affected areas that housed some of the victims of the floods were in session on Monday, but the school pupils weren’t in school because they have lost their school uniforms, books and other food items to the floods.

A similar story runs through all the schools in the affected communities. The headteacher of the Simiw D/A Basic school, Faith Bissi, said that the teachers defied the impact of the floods and went to school, but no single student could report to school.

“We came to school all prepared to teach, but there were no students in school today. We enquired and they told us that their uniforms, books and their food items have all been washed away by the floods,” the headteacher said.

At Abee, Simiw, Ankaful, Saaman Berase, and Kwaprow, their bridges are yet to be fixed. While others are trying to reconstruct their houses, there are many others who remain helpless and are calling for help.

One parent said, “We have been cut off from the other communities and we are helpless now.” We are struggling to have food to eat.”

We need some support to help us cope with this situation. We have lost everything, “another parent said.”

In the early hours of Monday, the Cape Coast-Jukwa-Kakum National Park road that caved in was fixed temporarily and opened to traffic. The Roads and Highways Minister, Kwesi Amoako Atta, was at the scene and inspected other bridges and roads that were affected. He says his outfit has a plan to fix Ghana’s roads and that the affected roads would be fixed in 24 hours.

He said despite the Ministry’s inability to prevent such disasters from happening, a formidable programme has been put in place to reinstate destroyed roads within 24 hours.

“The government, through the Ministry of Roads and Highways, has put together a special quick response team to deal with this type of situation.” “I want to assure the people of the Central Region and the nation that as much as we don’t pray for such disasters, the people of this country should be rest assured that there is a strong and formidable programme on the ground and wherever it happens, we shall move in to reinstate the roads depending on the degree and extent of the problem,” he assured.

He emphasised that his engineers, led by the Director of the Ministry’s Bridge Maintenance Unit (BMU), were working tirelessly across the region to ensure destroyed bridges and roads were repaired.

The Minister further stated that the Akuffo Addo-led-government is making efforts to ensure no area remains inaccessible and cut off for more than 24 hours.

“Under the government of President Akuffo Addo, no area will be allowed to be inaccessible and cut-off for more than 24 hours. That is the target of my Ministry. My engineers are prepared to work for the people of this country.”

While accessing the Jukwa-Twifo Praso road, the Minister assured the people of Jukwa that the repairs made to the roads are just temporary and that more work will be done to ensure that life will return to normal in the district.

The Regional Minister, Justina Marigold Assan, expressed her excitement about the urgency with which the issues of the people that have been affected are being tackled.