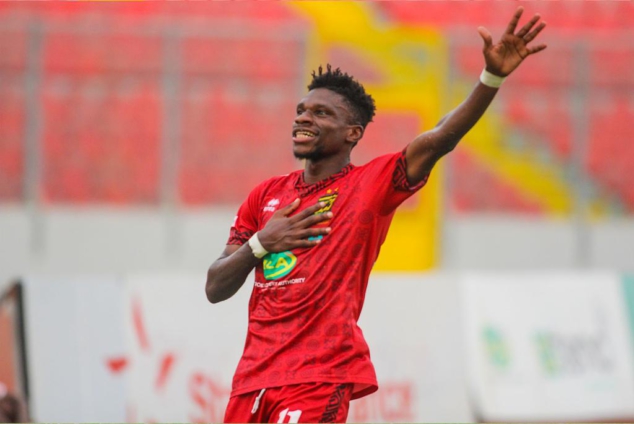 Kotoko lost out on being crowned league champions last season after a 1-0 defeat to Hearts in the final super clash of the league season and despite already being 12 points ahead, the Porcupines can make a huge statement with a win over the Phobians this weekend.

Kotoko have sometimes been unstoppable this season, winning 11 of their 16 league games and there is a real sense amongst fans that they can grab a 25th title this season, and Cameroonian forward Etouga seems eager to face rivals.

“Now I will enjoy the win [over Accra Lions], go home, sleep and prepare for Hearts of Oak,’ the striker said.

Etouga has been a revelation for the Porcupines this season, scoring in 11 of his 12 Kotoko appearances this season and is the current top scorer of the top flight. His early-season exploits have left many of the Kotoko faithful raving and the striker is pleased with the support he is receiving from the club.

“I am very happy to score a hattrick today, I say thank you to the team, management team and all of Kotoko. I am very happy,” Etouga said in his post-match interview.

Ahead of the clash this weekend, Kotoko have lost just two games as compared to Hearts’ four and while Hearts have recorded six draw, Kotoko have three.

DISCLAIMER: The Views, Comments, Opinions, Contributions and Statements made by Readers and Contributors on this platform do not necessarily represent the views or policy of Multimedia Group Limited.
Tags:
Etouga Mbella
Super Clash