If our democracy is less 'Ghanacratic' and more 'Americratic', then Ghana is headed for doom – Senyo Hosi - MyJoyOnline.com

If our democracy is less ‘Ghanacratic’ and more ‘Americratic’, then Ghana is headed for doom – Senyo Hosi 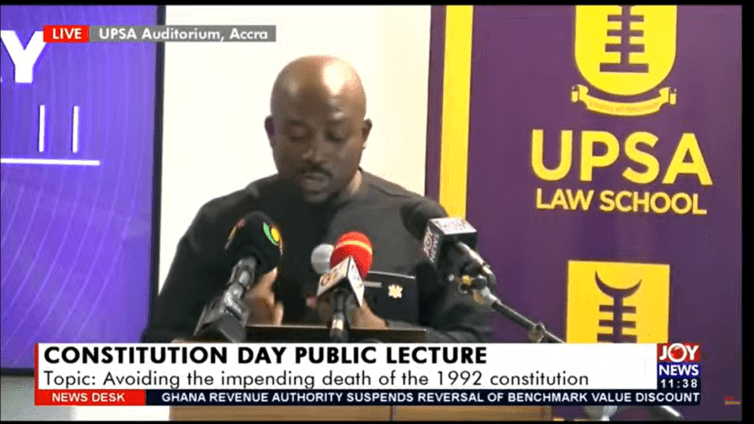 Economic Policy Analyst, Senyo Hosi has intimated that the country’s democracy faces a looming threat should its operators continue to disregard the provisions of the 1992 Constitution at the expense of the people.

Mr Hosi, speaking at a Constitution Day Public Lecture themed, “Avoiding the Impending Death of the 1992 Constitution,” said that as the populace’s problems have worsened, many, particularly the youth, have begun advocating for the supreme law’s demise.

He described the situation as unfortunate since the Constitution has been the bedrock of Ghana’s democracy and political stability for the last three decades.

He, therefore, called for what he called a ‘Ghanacracy’ that will prioritise the needs of ‘we the people’ and adapt to change.

“Democracy must, however, be adapted to fit our circumstances. This tells us that the democracy of any sovereign is sustainable and potent only to the extent of its flexibility to its evolving cultural and developmental circumstances.

“If our democracy is less Ghanacratic and more Americratic, then we are headed, truly for doom,” he said on Friday.

While acknowledging the successes of the supreme law, Mr Hosi, in his keynote speech, questioned the constitution’s adequacy in the coming years.

“I unreservedly agree that one legacy of the 1992 constitution is that it has given us political stability. This is important because it was the most sought-after commodity between 1960 and 1990.

“Ironically, this is where my difficulties with our current constitution begin. The delivery of political stability over the past 30 years is no assurance of stability in the next 5, 10, 20 or another 30 years,” he opined.

In view of this, the Chief Executive of Ghana Chamber of Bulk Oil Distributors (CBOD) noted that should the 1992 constitution be re-evaluated to incorporate the hopes and dreams of the people, the supreme laws of the land will be sustainable.

“I opine that the enduring stability from a constitution lies in its ability to sustain the hope for a better and fuller life, and in our case, the blessings and values promised in the preamble of the 1992 constitution.

“We cannot take our political stability for granted, so we must ask, “Are we delivering on the promises of liberty, equality of opportunity and prosperity?” “Are we living the values of freedom, probity, accountability, and justice?”

“If not, then the bigger question must be asked, “Are we eroding hope that we will deliver?” If yes, then for sure the death of the constitution may well be nigh,” he stated.