I'll use my wits against Dogboe - Navarette - MyJoyOnline.com

I’ll use my wits against Dogboe – Navarette 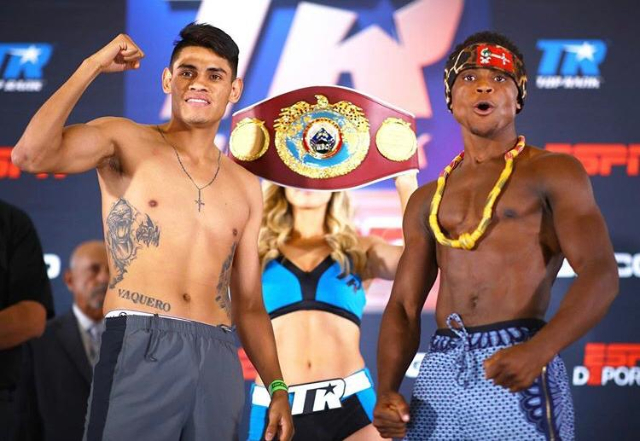 Emmanuel ‘El Vaquero’ Navarette the WBO super bantamweight champion, has exclusively hinted to Joy Sports he will use more strategy in tomorrow’s bout against Isaac Dogboe.

Navarette who has a record of 26 wins and a loss scored a one-sided decision against Dogboe at the Madison Square Garden in New York on December 8 last year to claim the title from the Ghanaian.

“Thanks to God that fight went very well for me. Dogboe is a very good fighter.

But I went in with great focus. So it was the focus that won me the last fight,” he told Joy sports at the Tucson City Center Hotel.

Navarette who was under the guidance of Pedro Moran for the December fight has changed trainers and will now work with his cousin, Pedro Navarette.

The 24-year-old Mexican has who is likely to receive support from the Hispanic numbers at the Tucson Convention Center is confident he will record another victory and keep his WBO belt.

“This time around I will use my brain more. I don’t have to chase Dogboe. He has to come to me. So I will go in using more strategy,” he revealed to Joy Sports.

The Mexico City-born champion comes in with reach advantage of 20cm and stands 5′  7″ tall while Dogboe is 5′ 2″.

These physical traits are seen as a great advantage for Navarette who will be staging his first title defence after last year’s win.