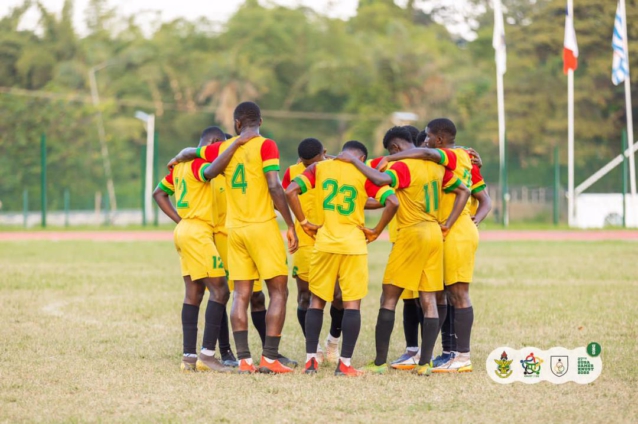 The men’s soccer team of the Kwame Nkrumah University of Science & Technology (KNUST) has set up an epic final with the University of Ghana (UG) in the ongoing 27th Ghana Universities Sports Association (GUSA) Games.

Beyond the two schools’ academic prowess in Ghana, they will lock horns this time, in the final of men’s football competition as each side looks to win the battle of supremacy in sports.

KNUST so far has gone unbeaten in the competition and reached the final on Thursday after beating city rivals, AAMUSTED 4-1 on penalties following a goalless draw in regulation time.

Captain of KNUST, Edwin Amoako-Atta effected the first spot kick, unleashing a beautiful strike beyond the reach of the UG goalkeeper.

Mustapha Frimpong, Daniel Asiedu and Darlington Adu scored the remaining spot kicks for KNUST to put the game beyond the reach of AAMUSTED.

The host institution, KNUST thrashed GIJ 6-0 in the first group C game before winning 4-2 on penalties against UEW to top the group.

KNUST held on to another goalless draw in the quarter finals against defending champions UCC in regulation time but won 5-4 on shootouts to reach the last four of the football competition.

In the other semifinal clash, UG edged out University for Development Studies (UDS) on Wednesday, winning 13-12 on penalty shootouts after the entire 90 minutes of the game produced no goal.

Before Legon reached the final, they beat UMAT 3-1 in the first group B game, emerged 3-1 winners over UHAS, beat GIMPA 1-0 and drew 1-1 with UNER in the last group game.

In the quarter finals, UG defeated UEW 1-0 before beating UDS on penalties in the semifinals to set up the clash with rivals KNUST.

The final, which is scheduled for a 1pm kick off takes place on Friday, November 18, 2022 at the Paa Joe Sports Stadium.

DISCLAIMER: The Views, Comments, Opinions, Contributions and Statements made by Readers and Contributors on this platform do not necessarily represent the views or policy of Multimedia Group Limited.
Tags:
GUSA Games
KNUST soccer team
UG soccer team