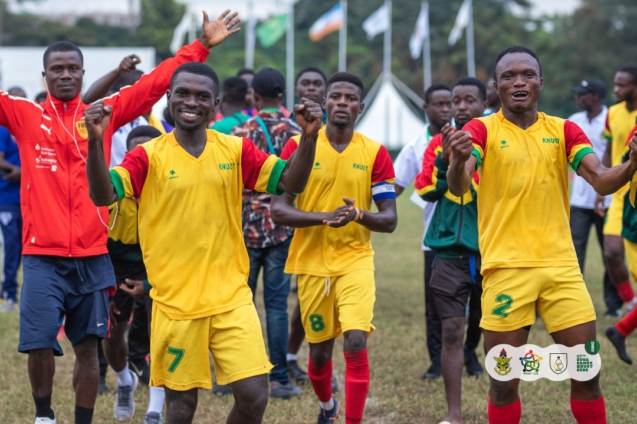 The Kwame Nkrumah University of Science & Technology (KNUST) have been crowned champions in the final of the men’s football competition, after beating arch rivals University of Ghana (UG), on Friday to climax the 27th edition of the Ghana University Sports Association (GUSA) games.

In what was described as a successful competition, GUSA held a closing ceremony on Friday to draw the curtain on the 27th GUSA games.

But on the day of the closing ceremony, the men soccer team of KNUST after going unbeaten in football at the GUSA games clinched gold to climax their good show at the Paa Joe Stadium.

They emerged 5-4 winners on penalty shootouts against sworn rivals University of Ghana after the game ended 1-1 in regulation time. Paul Attah Yeboah’s strike for UG canceled Daniel Asiedu’s opener for KNUST but the latter will be the winners after edging their rivals on penalties.

Captain of KNUST soccer team, Edwin Amoako Attah who guided his team to win gold in men football during the 2017 Mini GUSA games at UCC shared his impressions with LUV Sports after lifting the trophy.

“I am very happy to win this trophy. I have to say thank you to my team mates, coaches and the entire KNUST family for making this possible.

‘’It was a tough game, right from the group stages through to the knock out phases but we kept on believing that we can do it.” He said.

In the end, UEW came first on the medal table with 22 gold, 22 silver and 17 bronze medals.

GUSA President Shaibu Ibrahim Tanko was satisfied with the organization of the 27th GUSA Games at KNUST.

“It has been a marvelous competition and I am excited to have been part of the organization of such a successful tournament.’’ he said.

University of Cape Coast (UCC) will be hosting the next edition of GUSA Games in 2024.

DISCLAIMER: The Views, Comments, Opinions, Contributions and Statements made by Readers and Contributors on this platform do not necessarily represent the views or policy of Multimedia Group Limited.
Tags:
GUSA Games
KNUST