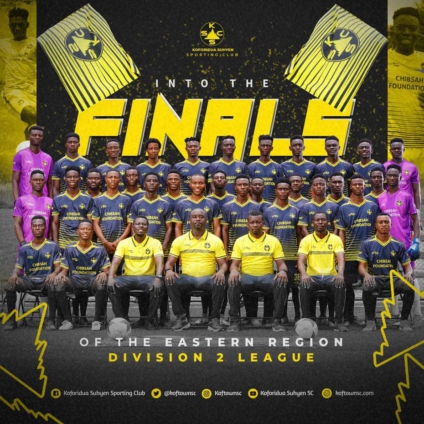 Koforidua Suhyen Sporting Club (KSSC) thrilled Talons FC by beating them 7-2 at Phar Rangers park in Mampong to book a spot in the final of the 1st division league qualifiers.

KSSC, who look destined to miss out on a place in the finals following their narrow defeat to Warriors last weekend, had a must win task and hope Fotobiman FC do them a favor by defeating Great Warriors.

Warriors started the matchday on top of the group. However a 4-0 defeat to Fotobiman FC ensured they dropped to 3rd in the group.

The games were played simultaneously at Dawu and the Mampong park respectively.

Following their Lackluster first half performance against Warriors, Coach Oppong made four changes to the side that lost last weekend.

Six unanswered goals in the first half started with Baba Fuseini’s brilliant strike outside the 18-yard box before Yussif Chibsah added his Hattrick, Baba Fuseini found the net again for his brace of the day with 1 goal each from Nelson Odoi and Frederick Twumasi was enough to seal a historic place in the middle-league finals for KSSC.

The final game which was scheduled to take place on Sunday, September 19 has been placed on hold following a crowd violence that disrupted the decider match between Okwahu United and Kwabibrem FC