Security forces in the central Asian republic of Kyrgyzstan have stormed the home of former President Almazbek Atambayev in an attempt to detain him.

Mr Atambayev’s supporters clashed with the troops and one officer died from gunshot wounds, officials said.

It is understood Mr Atambayev is still inside his compound, on the outskirts of the capital Bishtek.

Mr Atambayev has been accused of corruption, which he denies. Parliament stripped him of immunity in June.

According to Kyrgyzstan’s national security committee (GKNB), special forces armed “only with rubber bullets” were undertaking a “special operation to detain” the former president on Wednesday.

The GKNB said that as the troops moved in, Mr Atambayev’s supporters fired back with live ammunition.

The health ministry said 36 people were injured in the clashes in Koi Tash village, including several members of the security forces.

“A special forces officer was delivered (to hospital) in an extremely serious condition with a gunshot wound. Despite resuscitation attempts, he died,” a health ministry statement said. 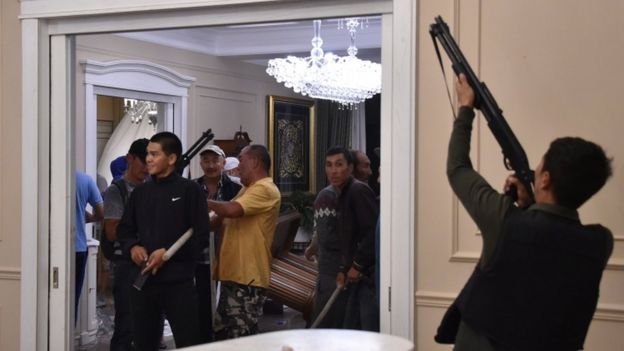 Image caption: Supporters of Mr Atambayev were in celebratory mood after driving special forces from his home

Witness Mirbek Aitikeyev, who posted footage of the raid on Facebook, told AFP news agency that some of those protecting Mr Atambayev had seized weapons from the special forces, who “retreated under the onslaught of the crowd”.

“Atambayev is still at his home… there are rumours that additional forces will be sent. The people here are making preparations,” he said.

Images from the scene showed roads leading to the compound barricaded by Mr Atambayev’s supporters while security forces regrouped nearby. 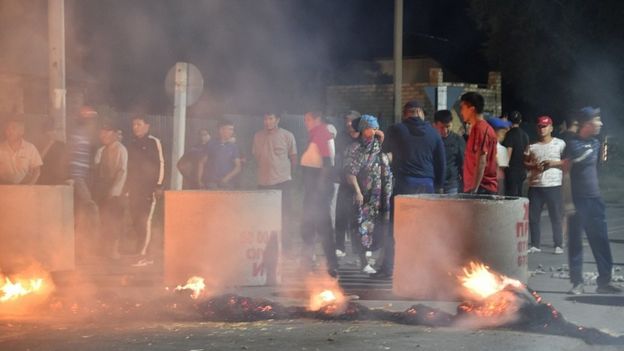 Image caption: Supporters of Mr Atambayev have blockaded streets in the village of Koi-Tash 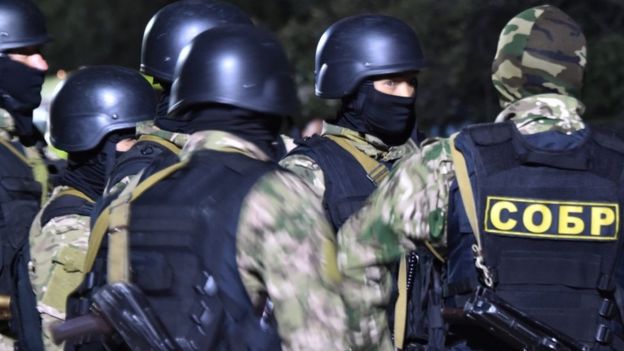 Image caption: Members of the Kyrgyz special forces are regrouping in the village of Koi-Tash near Mr Atambayev’s home

Kyrgyzstan became independent with the collapse of the Soviet Union in 1991 and most of its six million people are Turkic-speaking Muslims.

Mr Atambayev was president from 2011 to 2017 before handing over to Sooronbai Jeenbekov.

At the time the two men were close allies but relations later soured, and observers say Mr Jeenbekov moved to sideline his predecessor politically last year. 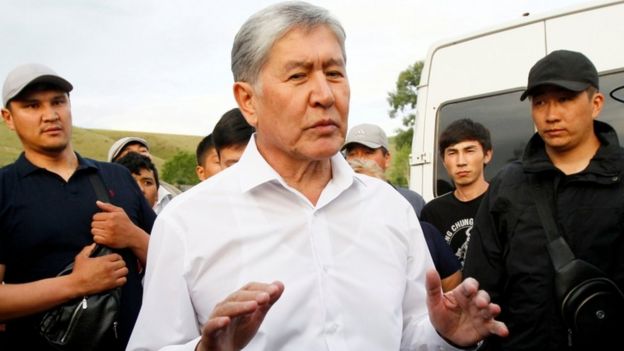 Since losing his immunity Mr Atambayev has ignored orders to surrender to police for questioning over alleged abuses of power while he was in office.

An increasingly embattled Mr Atambayev travelled to Moscow last month for talks with President Vladimir Putin, but the Russian leader expressed his support for Mr Jeenbekov and urged the country “to unite around the current president”.

Mr Jeenbekov’s office said he was cutting short a holiday to return to Bishkek and had called a meeting of the security council for Thursday morning.