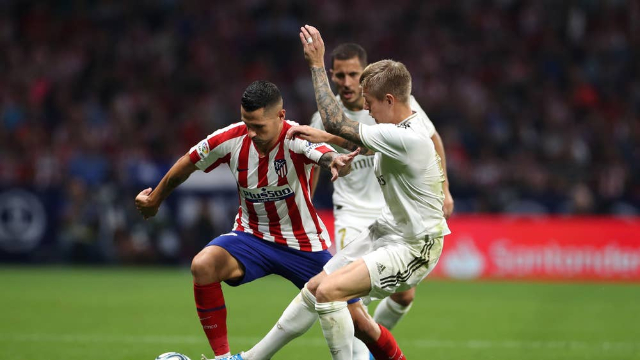 In a first half of few clear-cut chances, Diego Costa was inches away from sliding home Thomas Partey's low cross.

Gareth Bale should have given Real the lead in the second but blazed Nacho's cross over the bar.

Jan Oblak produced a marvellous save to deny Karim Benzema late on.

Diego Simeone's side thrashed Real Madrid 7-3 in New Jersey in pre-season, but the match at the Wanda Metropolitano was a much more cautious affair with only two shots on target in the first 45 minutes.

Both those efforts came from Toni Kroos, who twice forced Oblak into action with low drives from outside the box.

Atletico failed to properly test Thibaut Courtois throughout the 90 minutes, although it was not for the lack of trying.

Costa almost slid in Partey's delivery, before Joao Felix – who marked his first competitive Madrid derby appearance with a lively performance – dragged a fierce shot off target from the edge of the area five minutes before the break.

Real enjoyed the better of the openings in the second half, Bale scooping Nacho's low delivery high over the crossbar from an excellent position.

Benzema thought he had snatched all three points for Zinedine Zidane's side with 15 minutes remaining but Oblak, diving at full stretch, kept out the Frenchman's goal-bound header with a strong left hand.

The draw lifts Real one point above Granada – who beat Leganes 1-0 earlier on Saturday – while Atletico climb above Barcelona into third.