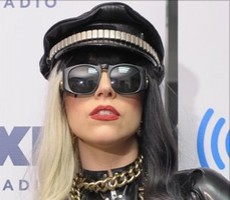 Lady Gaga narrowly escaped serious injury when she fell off the stage while dancing with a fan during her Enigma show in Las Vegas on Thursday night.

During the show, at Park MGM’s Park Theater, the 33-year-old invited a male fan on stage, who excitedly picked her up, prompting the singer to wrap her legs around his waist.

However, after the man took a few short steps, he went too far and tumbled off the side of the stage. Videos of the shocking moment doing the rounds on Twitter show Gaga hitting the ground first before the man lands on top of her – all to the soundtrack of screams from the audience.

Despite the unfortunate accident, Gaga didn’t let it affect her concert and got straight back up to continue with the show.

“Lady Gaga fell off the stage and then proceeded to kill the Bad Romance choreography like nothing ever happened. The level of professionalism… far too much!” one fan praised her on Twitter.

The Shallow singer has yet to comment on the incident, and whether or not she sustained any injuries.

Gaga appeared in good spirits as she prepared for the show on Thursday night, however, sharing a snap of herself in a pink swimming costume which perfectly complemented her pink hair.

She wrote alongside the picture: “Pre-show routine: Hard workout and then Galactic Laps. GagaPhelps.”