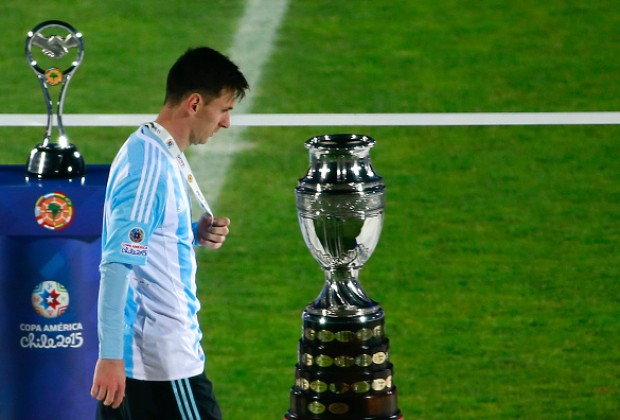 Argentina forward, Ezequiel Lavezzi, believes Lionel Messi will win a major trophy with the national side one day.

Argentina lost 4-1 on penalties to hosts, Chile, after it ended goalless after a 120 minutes of football on Saturday evening.

La Albiceleste lost the 2014 FIFA World Cup final to Germany and now have now lost out on the South American title and the Paris Saint-Germain forward says this has left a sour taste in their mouths.

"At some point Leo (Messi) is going to win something with Argentina," Lavezzi told reporters.

"We thought this was an opportunity to make our mark, but unfortunately we could not. It hurts a lot.

"Once again we are left with a bitter taste. It hurts because we believed that this was the chance to win something.

"I think that we should continue on this path. We are all very good in terms of the group. We are just missing that little step to achieve something."

Messi also featured for Argentina in the 2007 Copa America final, where they lost 3-0 to rivals Brazil in Venezuela.