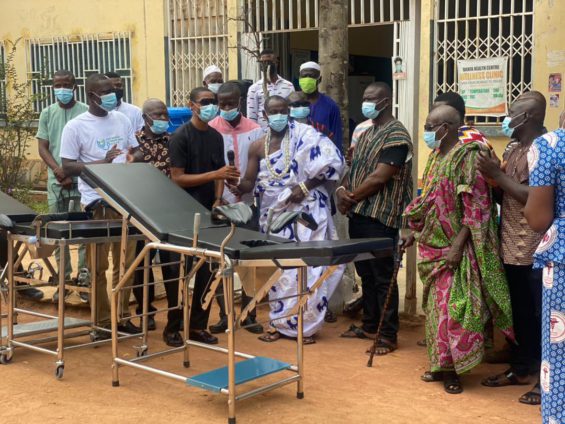 The donation goes to fulfil a request made by the Center to the Office of the MP.

The Danfa Health Centre is a government facility which offers services including general OPD and maternity services. The facility serves a community of more than 11,000 people in the La- Nkwantanang-Madina Municipality.

For about half a decade now, the hospital had only one delivery bed which is now old and rusted, yet was being used for deliveries for lack of options. The situation led to a decline in the number of people who deliver there.

Most expectant mothers, who start ANC at the Health Center end up delivering at other health facilities depriving the facility of much needed revenue.

As part of improving the health of people of the Madina Constituency especially constituents living within Danfa Electoral Area, the MP, through his Health Project donated two new delivery beds to the center.

The Director of the Center, Mrs. Aseye Apetsi, in receiving the beds expressed gratitude to the MP and said this was the best donation the Center had received this year. She said the lack of delivery beds had been a major cause of headache for both herself and midwives at the Center.

The Chief of Danfa, Nii Djanie Tsuru Afutu Buampon, also thanked the MP for his commitment and efforts to improving the lives of the people of Madina.

He said “we have had several MPs but we see the commitment of this MP to improving our living standards.”

Mr Francis-Xavier Sosu, on his part expressed appreciation to the Chiefs, Elders and residents of Danfa for the foresight and leadership in ensuring that the Danfa Health Center was established.

He also thanked management and staff of the Danfa Health Center as well as members of his Health Project for their commitment and service to the people of Madina and Danfa in particular.

He said the donation formed part of his vision to achieve Sustainable Development Goal (SDG 3) which entails good health and well-being for the people of Madina. He also reiterated his commitment to ensuring that the Danfa Health Center is enhanced to the status of a Polyclinic.