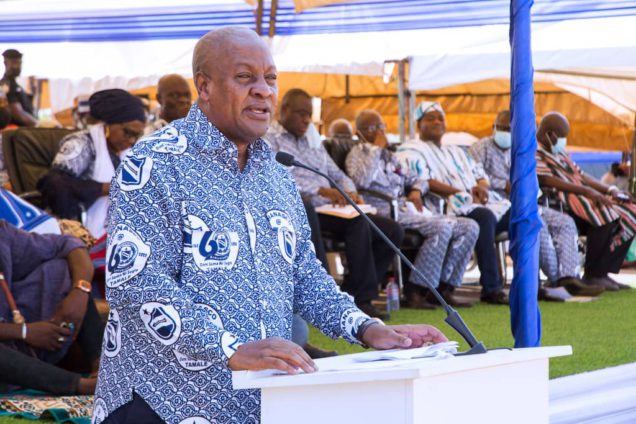 According to him, while affordable and quality education is key, focus must be thrown at addressing the menace.

He made this known at the 60th anniversary celebrations of the Ghana Senior High School (GHANASCO) in Tamale on Saturday, November 27.

For the former President, it is simply not enough to tout the successes of the free SHS policy or any free graduate education since the knowledge acquired cannot be put to use in the job market due to lack of job opportunities.

He noted that the Finance Minister reported in the 2022 budget that since 2017, government has recruited over 200,000 onto the public pay roll bearing in mind that universities churn out approximately 100,000 graduates annually.

”You can calculate the number of graduates who have been churned out since 2017, not adding other institutions of higher learning. If you take an average of 100,000 a year, it means over the last five years, we churned out about 500,000 graduates and if the payroll has been able to absorb 200,000 it means that you are throwing 300,000 people onto the unemployment market,” he said.

He, therefore, described the current situation as precarious, adding that ”indeed the entire government payroll amounts to some 700,000 people that includes all our teachers, nurses, doctors, drivers, watchman, minister, judges, and MPs.

We are just a little above 700,000 people. It means that just a little over two percent of our population of 31 million is engaged in the public sector.”

The former President acknowledged that the private sector can provide the youth some job opportunities. However, citing the financial sector cleanup, he stated such support system is being strangled.

“Financial institutions and microfinance organizations that had taken the SME space and were providing credit that was keeping small businesses growing and startups on their feet in the informal space were shut down. The little support from government through MASLOC, NBSSI is never accessible or inadequate for any meaningful investment by the youth who are starting something when they leave school,” he explained.

These challenges and the lack of hope by the youth, he opined, have led to the increased patronage of lottery and illegal migration out of the shores of Ghana.

He therefore reiterated the National Democratic Congress’ offer for a national dialogue to find solutions to the employment situation in the country.

Also, the former President eulogized his alma mater for the giant footprints it has left including being the first school in Ghana to launch two rockets.

He lauded the institution for their impressive performance at the West African Senior Certificate Examination in the last ten years.

Mr. Mahama said GHANASCO has offered him several opportunities including his first leadership position as a prefect and a wife.

On her part, Headmistress of the school, Hajia Amina Musah praised government’s stem programme, which she believes if well implemented, will enable the youth to become active participants benefiting from the fourth industrial revolution.

She outlined some of the successes chalked by the school, including producing a President. Hajia Amina said the school started with 70 boys and two courses but currently has a population of over 3,000.

She praised former President John Mahama and Vice President Dr. Mahamudu Bawumia for their diverse contributions to the school.

The Minister of Tourism, Arts and Culture, Dr Mohammed Awal who represented the Vice President also praised the school for its excellence in academics and sports.

He said the school has produced astute politicians, sportsmen, chiefs among others. He assured of government’s commitment to continue to addressing the challenges facing the school.

He pledged that with the support of his partners from the US, an ICT center at a cost of $400,000 will be handed over to the school.