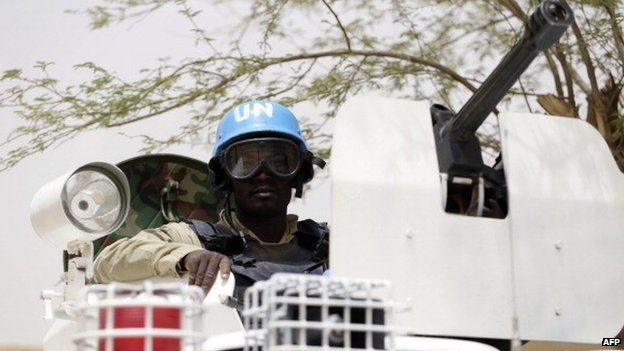 Nine UN peacekeepers from Niger have been killed in an ambush while on patrol in north-east Mali.

The UN said it was the deadliest attack on its mission in Mali.

French and African troops intervened in Mali in January 2013 to stop the southern advance of Islamist militants on the capital, Bamako.

The insurgents were expelled from the northern towns they controlled but attacks have continued against the UN force deployed to help bring stability.

The 9,000-strong UN force, known as Minusma, took over peacekeeping operations in July 2013.

The UN convoy came under attack from heavily armed gunmen on motorbikes between the north-eastern desert towns of Menaka and Ansongo, Minusma spokesman Olivier Salgado told the Reuters news agency.

Minusma has not said who was responsible, but a UN officer from Niger told the AFP news agency that it was carried out by the Movement for Oneness and Jihad in West Africa (Mujao), an al-Qaeda-linked Islamist militia.

Mali descended into conflict after a coup in 2012 prompted by concerns over how to deal with a Tuareg rebellion in the country's vast northern desert region.

Al-Qaeda with its Islamist allies took advantage of the subsequent chaos to seize the north, sidelining the Tuaregs.

Since the UN troops deployed, presidential polls have been held and the Tuareg community is now among several groups attending on-off peace talks in Algeria to settle issues of how the north should be governed.