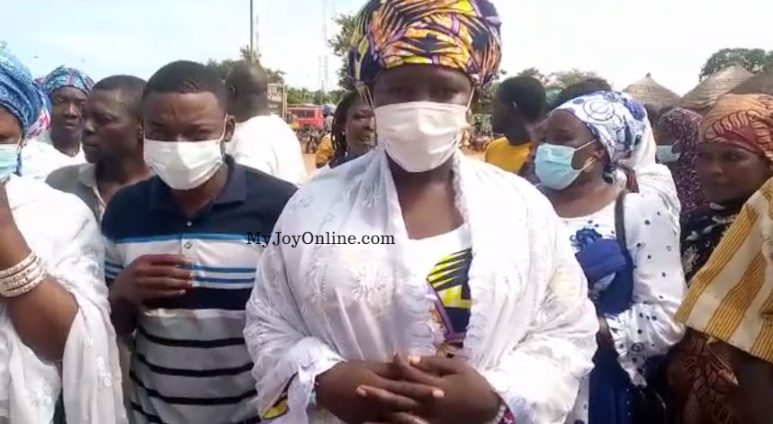 President Akufo-Addo’s nominee for the East Mamprusi Municipal Assembly, Rashida Mahama, has been welcomed by the Mamprugu overlord, Naa Bohaga I.

Speaking on behalf of the overlord, an elder of Nayiri, Mba Maasu, said, “the overlord has accepted her.”

“Not only the overlord but the entire state. We have all embraced her, and we gave her a warm welcome”, he added.

However, considering the misunderstanding surrounding her nomination, the overlord advised her “to know how to handle everyone” and also thanked the President for the decision.

The MCE was presented to the overlord and his elders in Nalerigu by the constituency executives of the ruling party.

Some of the failed aspirants, including the immediate past MCE, Abdul Nasiru Danladi, were part of the delegation to the Nayiri.

Dozens of party supporters and sympathisers of the nominee cheered and danced on the streets of the regional capital as she was being outdoored.

President Akufo-Addo selected Rashida Mahama, the party’s Women Organiser in the region, as his MCE nominee for East Mamprusi.

Some party supporters in Gambaga voiced their rejection of the nominee and criticised the President’s decision.

The appointment, the supporters believe, was only going to deepen the party’s cracks rather than mend them.

However, the constituency chairman, Iddrisu Zakaria, who led the visit to the Nayiri, thought otherwise.

“There won’t be any difficulty to reconcile”, he said.

“Reconciliation has started …because even this morning, 60% of those who applied followed us with Hajia to go and pay a visit to the Nayiri”.

The immediate past MCE also pledged his support.

“I’m here to assure her that I will be giving full cooperation to the former MCE. I want to send a signal to everybody to understand that politics is a game of people and that everybody must contribute their quota to the development of the area”.

The MCE also urged for calm and called on his aggrieved supporters to support the nominee.

“Four years ago, it was my turn, and it is the time for Hajia Rashida also to contribute her quota to the development of the municipality.

“So I’m here, this morning, together with the people gathered here to accompany her to say hello to the overlord of Mamprugu Traditional Area and stakeholders in the constituency”.

On her part, the nominee called for public support. She also talked about women empowerment and party reorganisation.

“We are going to team up to work for the betterment of East Mamprusi”, Hajia Rashida said.

“I think people need recognition, and I in person will bring that recognition on board. I will reach out to them and involve everybody so that we champion the course of East Mamprusi municipality,” she told JoyNews.